The Living Legend, Part I

Galactica is reunited with Pegasus, a sister battlestar previously thought destroyed. Led by the legendary and sometimes arrogant Commander Cain, the fleet is torn in its loyalty between Adama and Cain, but they eventually join forces in a daring attack on the Cylons. 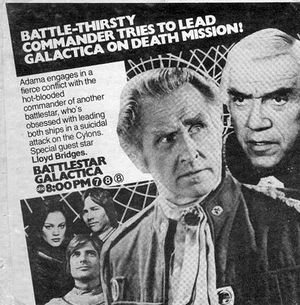 Apollo: Are you in a little pain?
Starbuck: No! What are you talking about?
Apollo: Hey, hey. It's me, Apollo, remember? We talk about things.
Starbuck: Yeah, well, I— I guess I never did like to admit that I form, uh... attachments.
Apollo: You don't even like to admit it to yourself. You know, I never understood that about you.
Starbuck: You were always part of a very big family, and I never had that. So I just grew up keeping the number of people around me as large as I could.
Apollo: So you couldn't be hurt by any particular one?
Starbuck: Look, I don't care if Cassiopeia... feels something for this Cain. I just don't understand the, um, combination. He's uh– he's uh–
Apollo: Too old?
Starbuck: Yeah.
Apollo: Starbuck, I think you'd better read up on your Book of the Word. Some of the Elders of Kobol were married to some very young wives.
Starbuck: Wives? Aren't we getting a little ahead of ourselves here? She wouldn't marry him. Anyway... who cares? Not me!

Sheba: Working with you won't be a problem.

Apollo: We have found a weakness or two now haven't we?

Cain: A toast to our victory over the Cylons!!

Apollo: (to Adama) Commander, with all due respect, Blue Squadron was nowhere in the vicinity when those tankers blew up!

Centurion: Sir, I suggest you look at the other battlestar.
Baltar: That's impossible!
Centurion: No, it is a battlestar.

Anne Lockhart: I remember my first episode, which was the two-parter with Commander Cain…there are pieces of film which they will shoot and reuse constantly every episode, and the first time they had to shoot me in the [V]iper cockpit, shooting out of the Galactica, they gave me my helmet and said, here’s what you have to do…I had to lean back, like the gravity was forcing me back in my seat. Well, they started filming and I pushed myself back with all of my strength, hit my helmet, it flew up and hit me in the face, and that scene is in several episodes. I felt sooo stupid. The next time I did it I figured out to keep my head down and sent my back into the back of my seat instead of my head.[7]

The Berkely novelization adds a lot of nuances and details to the episode.