This article refers to the 2003 re-imagined version of

The 2003 Miniseries debut of Battlestar Galactica was a "re-imagining," or updated version of the Original Series made more suitable to the modern sensibilities of the 21st Century. Aiming to tackle issues of civil rights, survival, terrorism, and religion, Battlestar Galactica is an drama following the survivors of a race of humanity—which number under 50,000. The new Battlestar was spearheaded by former Star Trek: The Next Generation and Star Trek: Deep Space Nine writer/producer Ron D. Moore and co-produced by David Eick.

A familiar but different battlestar Galactica finds herself leading a refugee fleet away from the destroyed Twelve Colonies of Kobol and on a (and initially fictitious) quest for Earth, with turmoil from within and danger from without.

Battlestar Galactica began as a four-hour miniseries pilot on the Sci Fi Channel in late 2003. As with the Original Series, the show begins with the destruction of the Twelve Colonies, but in a style more familiar and disturbing to today's viewers, making its events eerily reminiscent of feelings felt by many viewers to the sporadic and inconsistent news and chaos shown during the September 11, 2001 terrorist attacks in the United States.

While the design of the battlestar Galactica was probably the most familiar element derived from the Original Series, many elements of the new show were altered. The commander, William Adama, is a battle-hardened, secularly-minded commander on the eve of retirement for himself and his combat-decorated old battlestar. The names of Original Series characters are now the pilot call signs for his son, Lee "Apollo" Adama and the crack pilot, Kara "Starbuck" Thrace. Starbuck's change into a female character initially became a torrid issue to Original Series fans who feared this and other changes would render an inferior series.

However, some fans became pleasantly surprised of the quality of the miniseries and the regular series. Unlike its Original Series counterpart, the new series has not only survived to prepare for a fourth and final season in 2008, but has received many awards and nominations, including several Emmy nominations, a Peabody Award, a Saturn Award, and a Hugo Award. Its popularity has even given the show its own spin-off series, Caprica. In addition, the series has been sold to many other countries across the world.

After the miniseries, the regular series itself was not immediately approved due to financial considerations. Initially, Universal Studios and Sci Fi Channel both deemed that the series was unaffordable, despite David Eick's and David Kissinger's attempts to secure funding for the series. Fortuitously, the UK network Sky One was looking to fund "high-profile American shows", "ultimately making up the difference between what Universal felt it could afford and what we needed to make the show", according to Eick.[1]

Once funding was secured, the official announcement for the series' launch was given on 10 February 2004.[1] Moore, a majority of the production staff, as well as every principal cast member from the miniseries returned to work on the series. Moore also hired the show's writing staff, including Toni Graphia, David Weddle, Bradley Thompson, and Carla Robinson. [2]

Principal shooting on the first season was from 19 April to 15 September 2004, with each episode taking eight days to shoot. In an interesting twist, the series was first broadcast on a European network, Sky One, between 18 October 2004 to 24 January 2005.[3] As part of the funding agreement, Sky One was given the opportunity to play the new series first, leaving Americans to wait several months before the series would debut in the Americas.

Noted changes from the Original Series

The basic story is still present: robotic Cylons conduct a surprise attack on the Colonies, thus forcing several stranded spaceships to coalesce around the last surviving battlestar, Galactica, to seek a mythical Thirteenth Tribe where the survivors hope to find shelter from the Cylons.

Many of the fine details changed from the Original Series.

Characters are altered significantly from the Original Series.

The show has taken a more realistic turn, scientifically. Realistic science, which was absent in the Original Series, is applied in this series as best as cinematic and storyline requirements permit.

Certain models of Cylons appear human, right down to the blood, which generates some very disturbing problems in distinguishing friend from foe. This mirrors terrorist methods of infiltration and delivering destructive results to heavy population centers (akin to suicide bombers).

If you are a real, real staunch Battlestar Galactica person, please don't watch it. [N]ot only because of Starbuck but because we really don't stand true to the kind of characters that were built around the original.

I've gotten some really strong mail [from Original Series fans]. They're very angry. And I know Sci Fi Channel wants to say that everybody's going to enjoy it. They're not. They're not going to like this program.[5]

I approached the original show and looked at what worked and what didn't work. I tried to keep as much of the original show as possible. I kept all the essential elements of Battlestar Galactica: the aircraft-carrier-in-space; the rag-tag fleet; the Cylon attack, the escape and the search for Earth; Commander Adama; Adama's son "Apollo", who's Galactica's lead fighter pilot; the rogue pilot, "Starbuck"; their friend, "Boomer"; and Baltar, the traitor. Those were the main things I knew I had to keep – it wouldn't have been Battlestar Galactica without them.
I changed the things I knew didn't work. The original Baltar didn't have a motivation for betraying his race[6], so I knew I'd have to change that character. I also never understood why the Cylons were so intent on pursuing these humans across the galaxy[7], so I changed the background of the Cylons and their relationship with the human beings. Making the Cylons the creation of humanity enabled the Cylons to have a much more complicated love/hate relationship with humans, and also provided us with a way to use humanoid Cylons in the series, which was something we knew we wanted to do because there would be limits on how much we could use CGI Cylons.
Athena didn't seem to serve any function in the original show other than look beautiful and be a love interest for Starbuck, so I just got rid of that character.[8] And while I thought Boxey was part of the family and decided it would be nice to include him in some peripheral way,[9] I never considered keeping Boxey's dog for a second. The dog was just absurd! it was right out from the moment I took the show.[10]

The religious aspects of the show developed naturally out of my intention to reflect every aspect of the human experience. I was delighted because I'm fascinated with this notion of monotheism versus polytheism, and I felt its addition to the show enriched it and helped make it unique.[11]

We discuss everything. We even do try to discuss the sci-fi techie stuff, but we're just not very good at it. When the script throws out something like Callie [sic] and the Chief in space without any protection, lots [of us discuss] around the set if that was really possible. In the end, we all bow down to the experts who tell us it is. That shuts us up very quick. The political stuff, that's the juice of the show with the cast. That's pretty much what we like to inhabit, those social-political dilemmas and what they mean morally and legally, and how they pertain to the world that we're in now. The interesting thing about this show is that a lot of people come up to me and say, "Is it really liberal, or something?" but everyone across the political spectrum can find a view that they can side with. We don't cast moral judgment on any of them. It is all shades of gray that are out there to be interpreted, and that's the beauty of the writing, I think.[13]

The Cylons do garner your empathy gradually, as you see more and more from their point of view. That's a bold move. There is a lot about them that should be sympathetic to a Western American audience. They are monotheists, they kind of believe in redemption and rebirth and all these things that a lot of us believe in. The humans are polytheists and are a bit more anachronistic.[13]

No, I think it was [Sharon Agathon's] baby that really pushed her to the point of being more human than android. The love of a child is really the premise of this story. My [character's] love of my children, Roslin's love of humanity — all of us are her children. I have my son [Major Lee Apollo Adama], and of course I just lost my [surrogate] daughter [Captain Kara Starbuck Thrace], which was brutal. [14]

Each season, we mapped out where we wanted to go by the end of that season. That’s how I like to approach things. At the beginning of season one, we talked about where the end of the first year would be. And then, into the second year, we broke it up into groups of the first 10 and the second 10, and kept that style of planning, all through the show. I would say, somewhere mid-way through the second season, I started thinking seriously about what the end of the series itself might be. Ideas for where we were headed and what it all meant started to coalesce over the course of the third season. In season three, we started talking in earnest about, “Well, okay, if we do end it next year, what would it really be?,” and it just felt like, “Yeah, this is the right time to do it.” In terms of whether we’ve had enough time, I feel like we have. We’re really taking our cues from the story itself, and it just feels like the story has moved forward aggressively. What I’m proud of about the series is that it’s been unafraid to take risks and it’s been unafraid to move strongly forward, instead of trying to tread water. It just feels like the momentum of the series is now moving towards a conclusion. [15] 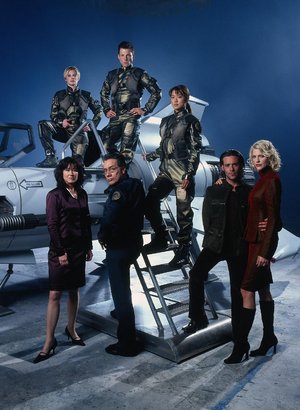 To view the list of all the directors and staff, see the Crew Portal.

For a complete list of all episodes, see the Episode Guide.