Tricia Helfer (born 11 April 1974) is a Canadian actor and former fashion model. She is best known to viewers as Number Six on the re-imagined Battlestar Galactica.

Born in Donalda, Alberta, Canada, Helfer's father was half-English, half-German, while her mother was half-Swedish, half-Norwegian. With her three sisters, she grew up working on her parents' grain farm with aspirations to study animal psychology, as well as to play college volleyball [1]. She started modeling at 17, after she was discovered by an agent while waiting in a movie-ticket line[1]. She moved to New York to start modeling right before her 18th birthday and competed in the Ford Supermodel of the World contest when she was 18, which lead to a ten-year modeling career[1].

The actress, who is 5'10" tall with measurements of 34-24-34, has an interesting physical attribute which she claims to be her "favorite quirk": webbed toes.[2]

Helfer won the 1992 Ford Supermodel of the World award; the former Elite model has graced the covers of such magazines as Elle, Amica Italia and Cosmopolitan UK, and has walked the runways for Christian Dior, Givenchy, Claude Montana, Emanuel Ungaro and other top fashion designers. A model for Victoria's Secret, she has appeared in advertisements for clients including Giorgio Armani, Oil of Olay and Saks Fifth Avenue.

Helfer started acting in 2002 after taking night classes for a year and a half in New York City and studied at the Penny Templeton Studios while she was still modeling. She later studied at Larry Moss in L.A, Margie Haber in L.A. and coached with Crystal Carson in L.A.. After doing correspondent work for the Canadian style/fashion TV-magazine series Ooh La La, Helfer gained attention as an actress when she played the lead female role of Sarah, the hero's love interest, in the two-hour premiere of the Showtime series Jeremiah. She later memorably played a teen model who tries to cut off her own face in an episode of the hit series C.S.I. and starred as Farrah Fawcett-Majors in the 2004 telefilm Behind the Camera: The Unauthorized Story of Charlie's Angels. Helfer, who can be seen in the modeling documentaries Catwalk and Unzipped, also appears in the comedy short Eventual Wife, seen on HBO/Cinemax and on the AtomFilms Web site. 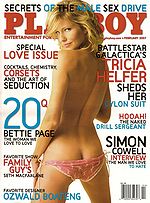 The February 2007 Issue of Playboy

Although her commonly-seen Battlestar characters of the Number Six copies have platinum blonde hair, the actress is a natural brunette. Originally, her own hair was dyed white. However, this eventually resulted in her hair "breaking off in chunks an inch long", so by the 8th episode of season 2, she switched to a wig, and played Gina Inviere with her own honey-blonde dyed hair.

Helfer donates many of her profits towards charities that benefit animals and animal shelters.

Along with Grace Park (Number Eight), Helfer appears in the 2007 instalment of the Command & Conquer series, Command & Conquer 3: Tiberium Wars, as General Kilian Qatar. She will also be appearing in the upcoming Halo 3: ODST, voicing an ONI agent codenamed "Dare", and in the highly anticipated StarCraft II as the voice of Sarah Kerrigan, the Queen of Blades.

The actress also appears in a 16-photo pictorial in the February 2007 issue of Playboy magazine.

Despite difficulties in approving Helfer's casting as Number Six, mainly due to her then-relative lack of acting experience, David Eick thought "she was great from the first time she auditioned, and I'm glad to say that I managed to convince everyone she was perfect for the part".[3]

According to an interview in Starburst magazine, Helfer was originally very confused on how to portray a humanoid robot, so Edward James Olmos told her to watch the sci-fi classic Blade Runner (which Olmos co-starred in), which also features humanoid robots, called "replicants". Helfer said that watching Blade Runner greatly informed her on how to play her role.

Additionally, in order to play the role of Gina Inviere in "Pegasus", Helfer researched post-traumatic stress syndrome and lost a few pounds. [4]

Although all the actors cast as the Significant Seven have been shown portraying multiple copies of their respective Cylons, Helfer has played the largest number of unique, named individuals in the Number Six line: Caprica, Shelley Godfrey, Gina, Natalie, Lida, and Sonja, as well as Baltar's "Virtual Six" (though it remains unclear as to whether this character is actually connected to the Number Six line). Helfer has also played numerous variations of Six, with different appearances and personalities (though their given names, if any, are not revealed).