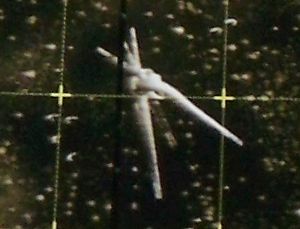 A communication relay is a station that relays messages between various points, so as to facilitate communications between units.

After the Fall of the Twelve Colonies, Gina Inviere "helps" Kendra Shaw locate and identify a communications relay used by the Cylons. During the planning stages of this attack, Colonel Fisk notes that the relay looks like a "frakked up can opener", and Admiral Cain decides to engage this target because it is considered a light target. Upon executing their attack plan, it becomes apparent that the communications relay they attack is a staging area and that Inviere has lead them into a trap, resulting in heavy losses of both military assets and personnel ("Pegasus", "Razor").