The Battle of Carillon is yet another ambush launched by the Cylons, who find the embattled Colonials, despite having only one battlestar, far better prepared than at the Battle of Cimtar a short time before.

The battle begins as Sire Uri gathers every Colonial Warrior to an award function on Carillon, hoping to use the ceremony as an occasion to call for a vote to disarm the military. The indigneous race of Carillion, the Ovions, are allied with the Cylons. They report to the Cylons of the presence of the Warriors, and the Cylons seize their apparent opportunity.

Fortunately, a suspicious Adama sends crewman and other personnel wearing Warrior uniforms to the planet, leaving the actual Warriors on alert aboard Galactica. When the ambush strikes, Galactica deploys her Vipers and manage to hold off the attack easily.

Starbuck and Apollo, on Carillon during the start of the attack, set fire to the tylium mines beneath the surface before they flee. Escaping in their Vipers, they decide to make an attack run against a Cylon basestar near the planet. After setting their communicators to Cylon frequencies, the two Warriors pretend to be in communication with several other attacking Viper squadrons (including squadrons that didn't exist like "Purple" and "Orange").

The Cylons are fooled; the Imperious Leader orders the basestar to retreat, moving the ship lower into the atmosphere to use the planet as a shield. By the time the Cylons recognize the deception, the tylium fires lit earlier had spread throughout the mines, detonating the planet and destroying the basestar with it (TOS: "Saga of a Star World").

The Battle of Carillon is a pivotal event depicted in the various tie-in novels, comics and other media.

With little exception, the battle ends the way as depicted in canon, with some reinterpretation. 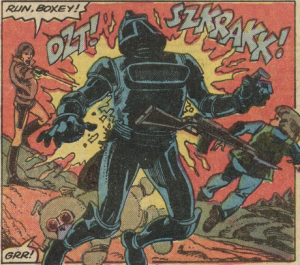 Apollo shoots a Centurion in its back while protecting Boxey in the subterranean catacombs of Carillon (Deathtrap!).

After the Colonials discover the Ovions and the chancery resort at Carillon, the Ovions are commanded by their local Cylon garrison commander to offer the human survivors all the comfort they can indulge in.

Despite Uri's rapt acceptance of their astral oasis, Commander Adama engages in his own preparations, vowing to never let his guard down again. In doing so, he and Colonel Tigh secretly hide their true Warrior contingents by supplying various non-combatants with uniforms. Unaware of this are Captain Apollo and Lieutenants Boomer and Starbuck, as the Ovions are already aware of their status as Warriors.

While Starbuck and Boomer encounter these ersatz Warriors, their pursuit of these persons — as well as Boxey and Muffey II's stumbling upon a Centurion — reveals Carillon as a death trap. Apollo sounds the alarm to the chancery's customers and the civilians begin fleeing, while the Cylon garrison reveals its presence.

Ground forces lead by Lieutenant Jolly dispatch the Cylons with landram deployments, and Apollo and Starbuck make way for their Vipers.

In orbit, the supreme star force stationed at Borallus arrives and begins their attack per the orders of the Imperious Leader. However, prepared for this trap, Adama is able to defend the rag-tag, fugitive fleet while Starbuck and Apollo make way for the single basestar in orbit.

Using audio chatter to feed Cylons mis-information on their strength, Apollo and Starbuck concoct a force of four squadrons — Blue, Green, Yellow and Pink — which leads the Cylons to go closer to Carillon for better protection. Once done, Starbuck and Apollo go on the offensive and ignite the tylium, destroying the basestar and Carillon, thus allowing the Fleet to continue its quest (Deathtrap!).