Sire Uri, much like his canonical analogue, is the deceptive politician who is elected to the Quorum of Twelve after the Cylon attack against the Twelve Colonies.

His character only appears in both the Berkley novelization and the Marvel comics. His character is developed into a considerable foil for Adama over the duration of the Marvel series. 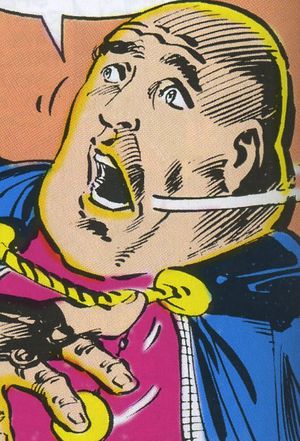 Uri as depicted in the Marvel comics.

One of the wealthier survivors from the fall of the Twelve Colonies, Uri makes his way to the rag-tag, fugitive fleet aboard his ship, Rising Star, and sets up residence in a private elite club area. Uri appears unconcerned about his wife, Siress Uri, who was not able to "make the voyage" and finds comfort with various younger and willing women. In the time since the exodus, Uri is voted into the new Quorum of Twelve, presided by the last surviving Quorum member, Commander Adama.

While investigating complaints of people "luxuriating" aboard Rising Star during a food crisis, Captain Apollo and Lieutenant Boomer forcibly gain entry into the club area. Much to Uri's ineffective chagrin, Apollo and Boomer take possession of the considerable foodstores that are found there, as Uri had freighted aboard prior to their exodus. Later, Uri claims that he willingly relinquished the food stores to the Warriors after the food issues where told to him, admonishing Adama for keeping said issues a secret. Uri proposes acquiring supplies and fuel at Borallus, but later supports Apollo's plan to fly through the Nova of Madagon to the outward world of Carillon (Exodus!).

After departing Kobol, and while still in the magnetic void, Uri schemes to remove Adama from his presidency in order to obtain power for himself. He tries to force Adama to abandon the sub-light ships, however Master Technician Shadrack convinces the Council that every sub-light ship could be converted to faster-than-light capacity within two weeks. Still, Uri's sticking point is the Fleet's ultimate destination: Earth. Considering Earth to be nothing more than some myth, he attempts to paint Adama as a madman, and threatens to ask for Adama's resignation if he cannot prove Earth's existence. This forces Adama's use of the memory inducer in order to bring forward the fleeting memory of what he saw on the inscriptions (The Memory Machine).

With Adama occupied, Uri orchestrates the loss of two of the Fleet's ships (The Memory Machine, All Things Past and Present), and uses this "emergency" to force the Council to elect him as president during a party aboard Rising Star two days later (The Memory Machine). As the Fleet's legal leader, he assumes command of Galactica and attempts to have Adama killed; Colonel Tigh manages to thwart the initial attack with Cassiopeia's help. Further, when the Fleet's agro ship goes missing—which is not planned by Uri or his harem, Medea—he panics and tries to stop his own men with Apollo's help. However, much to his dismay, the firefight damages the inducer's controls: Adama is locked inside the machine, apparently permanently (All Things Past and Present).

After the assassination attempt on Adama's life, Uri and his men are placed under arrest pending judgment from the Council, despite Uri claims that his men misinterpreted his denunciations of Adama, effectively acting on their own (Space-Mimic!).