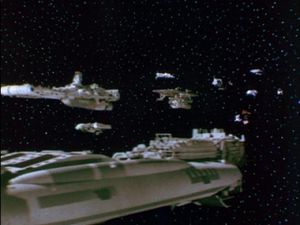 Yahrens following the Battle at Galaxy's Edge in "The Hand of God," the Fleet finds itself continually harassed and fleeing from the Cylon fleets, even after abandoning Baltar on a planet (Battlestar Galactica Annual 2014).

Following that encounter, the Fleet is pushed into an unnamed storm zone by the Cylons, nearly losing an ailing ship, the pleasure liner Ariadna (Classic Battlestar Galactica Vol. 2 #6). While in this storm zone, various persons in the Fleet are subject to dreams of Earth, ultimately found to have originated from flight engineer Xam. Xam uses his psionic powers to project a large fleet of battlestars, which force the pursuing Cylon fleet to leave the storm zone, thus allowing the Fleet itself to escape (Classic Battlestar Galactica Vol. 2 #7—#9).