If you were looking for the entry on cats in general, see: Cat.

Louanne "Kat" Katraine was the assumed name of a young woman named Sasha, a drug runner on Caprica with flying experience (TRS: "The Passage"). She is selected as a candidate pilot ("nugget") for Viper training under the command of Lieutenant Kara "Starbuck" Thrace (TRS: "Act of Contrition"). While she is a new pilot, she has a taste for fighting, and is often on the front lines when Galactica engages Cylon forces. She becomes Galactica' CAG during the colonization and occupation period of New Caprica.

She is headstrong, arrogant and assertive, which are traits she shares with Starbuck, and the two clash frequently. At the same time, Katraine is loyal to her friends and always tries to protect the pilots around and under her from dangers or perceived injustices.

Katraine dies after receiving cumulatively fatal radiation exposure while escorting civilian ships through a star cluster to a planet with a food source (TRS: "The Passage").

Katraine's real name is actually Sasha. She took the name "Louanne Katraine" from a girl who died two days before the attack. She was a drug runner in the Twelve Colonies working for a person named Enzo (TRS: "The Passage").

Katraine is selected from relative obscurity to become one of Galactica's first intake of trainee pilots after 13 experienced pilots were killed in a freak accident (TRS: "Act of Contrition").

Described as a "boonie jumper", Katraine is placed under the instruction of Kara Thrace, alongside nugget pilots Brendan Costanza and Donald Perry, with whom she forms a friendship.

Thrown in at the deep end - flying Vipers on their very first day of training, none of the nuggets perform particularly well - Kat in particular fails to make a combat landing on Galactica. Thrace washes out the entire group of candidates until Commander William Adama later forces Thrace to reinstate them.

Katraine's training continues until she is selected to fly with Lee Adama during a raid to secure a tylium mine from the Cylons (TRS: "The Hand of God"). Her fellow nuggets Donald Perry and Stepchild are killed in this action, but she and Hot Dog survive and are greeted as heroes on their return to Galactica.

Kat participates in the defense of Galactica when the battlestar becomes separated from the Fleet, and has to face down a Cylon basestar in order to relocate it (TRS: "Scattered").

After Lee Adama's defection to the Laura Roslin faction, his replacement, the newly promoted Captain George Birch negligently endangers Katraine during a training exercise. She is almost killed when Birch incorrectly directs her to attack an asteroid target as Hot Dog fires a missile at the target. Katraine's improving piloting skills save her from a dangerous collision with debris (TRS: "Home, Part I").

Kat is later promoted from cadet to the rank of lieutenant. She becomes increasingly exhausted with the mounting pressures of service in the Fleet with long hours, constant danger, and no possiblity of reinforcement. While trying to combat her fatigue, Kat becomes dependent on stims, of which the effects of their overuse make her emotionally unstable. She "moons" a documentary crew for her "buddies" on Freighter 212, berates Chief Tyrol for mechanical failures that are beyond his control, and later crashes her Viper into the landing bay, totalling the vehicle ("Final Cut", "Flight of the Phoenix"). She is pulled from flight status for some time, but is reinstated by the time that the advanced battlestar Pegasus joins the Fleet , when she flies wingman to Apollo on CAP when first contact is made with Pegasus.

In the wake of Admiral Cain's integration of Galactica and Pegasus' officers, Kat appears to have been made the acting-CAG of Galactica flight team. With Starbuck and Apollo both transferred to Pegasus and the failure of Cpt. George Birch as CAG during Lee Adama's absence, Katraine appears to be the most likely choice to fill the command vacuum. She is flight leader of the Viper wing that stands off against the Pegasus Vipers. In spite of making repeated requests for firing clearance, she manages to keep the situation from degenerating into a fire fight, and avoids several collision attempts in the fighters' deadly "chicken" game, each attempting to force the other side to fire first (TRS: "Resurrection Ship, Part I").

On day 189 of the human exodus, Kat is assigned CAP with Starbuck. Kat's maturity and past insensitivity show growth when Starbuck orders her to stop her small talk about Starbuck's off-hours behavior, which Kat does so without skipping a beat and returns to business by requesting permission to do a weapons check. As Kat test-fires her Viper's guns, an ammo misfire destroys Kat's port gun and sends debris at Starbuck's Viper, cracking her cockpit window. The two declare an emergency and safely return to Galactica. The cause of the malfunction was soon determined to be sabotage later blamed on a civilian ammunition worker that is part of the Demand Peace movement (TRS: "Epiphanies").

Katraine is more than personally upset with Starbuck's apparent behavior issues. While Kat obviously admires Kara Thrace, she tires quickly of Starbuck's drinking and bragging, which is affecting her work, and in turn affecting the pilots, especially the nuggets. Fed up with Starbuck's lording over the "Top Gun" beer stein as well as the rampaging Raider ace known as "Scar," Kat makes a bet with Starbuck on who will destroy the morale-sucking Raider first.

Kat manages pilot combat reviews, having become a highly skilled tactical pilot herself. She grimaces at Starbuck's inefficiencies and chimes in often to correct or chide Starbuck, much to Thrace's chagrin. Things come to a head in their rivalry when Kat openly criticizes Starbuck for substituting Jo-Jo for patrol rather than flying herself (she awoke that morning hungover and unable to fly). Jo-Jo and his wingman are both killed, and Kat is incensed. But instead of Starbuck delivering the first punch, it's Kat that delivers it. Their fight is interrupted by Captain Adama, who orders them on patrol near the Big Spud. Kat and Starbuck find Scar, and Starbuck's Viper is damaged in a near-successful ambush. The consummate wingman, Kat continually speaks to Starbuck to get a bearing, although Starbuck resists out of pride rather than working jointly to destroy Scar. When Starbuck realizes that because of Samuel Anders she doesn't want to die in order to take Scar with her, she guides Kat in to her position, manuvering Scar so he ends up right in front of Kat which he doesn't know until Starbuck moves out of the way. Thanks to Starbuck's actions, Kat is perfect position and finally destroys Scar by blasting off one of his wings, causing a fatal collison with an asteriod. 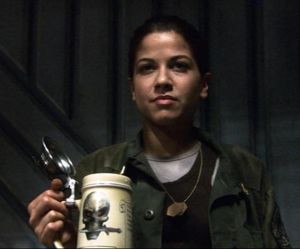 Kat chides Starbuck once more in the pilot's recreation room as she holds the Top Gun mug. Starbuck pours champagne in the mug and tells Kat, "You've earned it." Kat's slight smile in response is not only that of smugness, but also that of honor - for Starbuck to tell her that she was (at least for the time being) the best - is pleasing as a master would compliment a student (TRS: "Scar"). Kat's smugness is short-lived, as Starbuck offers a toast to all the pilots who died during their flight from the colonies. Overwhelmed with the memory of lost comrades, Kat nearly bursts into tears.

By the time of the Cylon invasion of New Caprica, with Lee Adama in command of Pegasus and Kara Thrace having left the fleet and settled planetside, Katraine has been promoted to Galactica's CAG (TRS: "Exodus, Part I"). During the Battle of New Caprica, she leads a group of Vipers escorting decoy Raptors, and presumably assists in the defense of Galactica in the following space battle (TRS: "Exodus, Part II"). Following the destruction of Pegasus, Lee Adama returns to Galactica and replaces Katraine as the CAG, who in turn becomes a squadron leader ("Torn", "The Passage"). 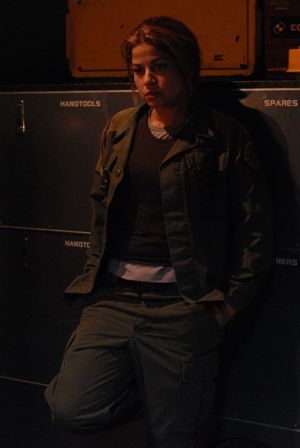 One of Kat's final moments (TRS: "The Passage").

During a food shortage throughout the fleet, Galactica's pilots are tasked with safely guiding the civilian ships through a highly radioactive star cluster to a food source on the other side. During this time Katraine encounters Enzo, who survived the attack and calls her by her real name, Sasha. Enzo confronts Katraine and threatens to reveal Kat's past to others unless she helps him. Thrace observes the argument and later confronts Enzo about it, who in turn reveals Katraine's secret to Thrace. Katraine confirms it to Thrace, who is angered over the secret, even suggesting that Kat could have possibly unknowingly aiding the Cylons in their infiltration of Caprica. Katraine begs Thrace not to tell Admiral Adama, saying that she wants to tell him herself.

Before the final trip through the passage, Katraine, who had already reached her threshold of radiation on earlier trips, switches radiation badges with Helo. During the final trip, she loses track of the Faru Sadin, but remains in the passage until she finds the vessel and joins the rest of the Fleet on the other side. Upon landing, Katraine is celebrated as a hero, but then succumbs to radiation poisoning and collapses on the flight deck.

On her deathbed, Katraine summons Thrace for a final reconciliation, and receives from Thrace an apology and a supply of sleeping pills, enough for an overdose that would allow her to die painlessly. Admiral Adama also comes to visit Katraine and informs her of her promotion to CAG again. Kat tries telling him the truth about her past, but he cuts her off, saying he doesn't need to know any more than what she did while serving under him. He pulls up a chair to sit watch over her, and comforts her with how the sickbay reminds him of when his son, Zak, was born, and how he and Carolanne had wanted a girl. After Katraine's death, Admiral Adama symbolically replaces Lee Adama's name with hers in the pilot roster board's CAG slot while the pilots observe in silence. Thrace goes to the wall of remembrance and adds Katraine's photo (TRS: "The Passage").

Eick: This young actress playing Kat has proven to be--and there's Bodie Olmos, Eddie's son, in the center there who's Hot Dog, he's also become a recurring character.
RDM: Well those three in the front, Chuckles, Hot Dog, and Kat, they all became "pilots" to us. And I don't think we really had any expectation of that. The idea was we were going to do "the nuggets", "the new pilots", was just going to be its own kind of story, and maybe you might see one of these guys again later. And what started happening is the writers just started putting them in, like almost every scene that we dealt with the pilots (of Galactica) so these became our "recognizable faces".
Eick: Kat is quite fine. She's someone we're now talking about, and have already, built into a much more prominent character. She's just a really, really talented actor, and she's someone who in a very different way than Katee (Starbuck), just exemplifies that sort of masculine fortitude, despite being a woman, that is required to be a pilot like this. In one of the upcoming episodes (TRS: "Scar"), we're actually going to deal with the tension between Kara Thrace and Kat.
RDM: Yeah, what happens when your protege starts outdistancing you. What happens when you train this young pilot, and it's great that she's a hot shot and all that, and then wait a minute, what if she starts being better than you?