This is a listing of sectors that are noted in the Re-imagined Series, but are unworthy of separate articles due to the limited content.

The location of the Battle of the Resurrection Hub (TRS: "The Hub"), according to Colonial starcharts. After Chief Laird retrieves information from Eammon Pike's flight recorder, Galactica discovers the debris and no survivors (TRS: "Sine Qua Non"). 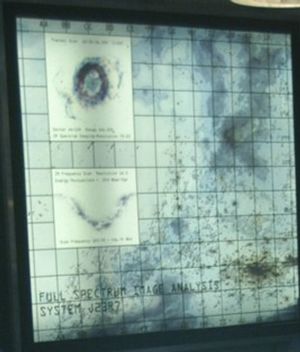 An image analysis of J23R7 in the Situation Room.

Sector J23R7 is the system where the Battle for the Tylium Asteroid takes place.

A full spectrum image analysis of the system is on a light panel in the Situation Room during this engagement (TRS: "The Hand of God").

Sector 728 is the region of the galaxy that contains the planet Kobol (TRS: "Kobol's Last Gleaming, Part I").