For the canonical character from whom this depiction is based, see: Adar (TOS).

This article covers the various depictions of the Original Series's Adar from the tie-in novelizations, comic books, and other media.

Adar, a Sagitarian, began his career in politics some two or three decades[1] before the Battle of Cimtar with his run for a minor political office.

Upon entering politics, he aimed to end the Cylon war and wrestle control of it away from the corrupt politicians, and were great friends of both Adama and Ila. He shared many of the same literary and cultural interests as Ila, but even those similarities were not enough to maintain their friendship as he became bogged down in the realities of politics and lost his optimism, to the point where he was merely using his friendship with Adama to strategise on how to deal with the military (Battlestar Galactica TOS pilot novelization).

Adar is the President of the Twelve Colonies of Man prior and leading up to the events of the Battle of Cimtar.

In 7346, during Osiris' reign as Aeries' councilor on the Quorum of Twelve, Adar has Colonel Adama removed from the Quorum in light of Lieutenant Apollo freeing Ensign Starbuck from false imprisonment aboard the Aerian Administration Hub (Battlestar Galactica: Starbuck 3).

When Starbuck presents McKintosh's incriminating information on Osiris's activities the night that Umbra fell, Osiris briefly takes Adar hostage and demands a shuttle. Starbuck saves Adar's life by mortally wounding Osiris, which leads to a prescient self-realization that "I really do seem to have a terrible judge of character." 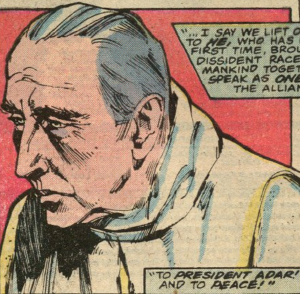 Adar celebrating the belief of forthcoming peace with the Cylons (Annihilation!).

Adar is the last president of the Twelve Colonies of Man who is misled by Baltar into a false peace proposal, despite the cautionary protests of Commander Adama.

Adar is destroyed aboard the battlestar Atlantia during the Battle of Cimtar (Annihilation!).