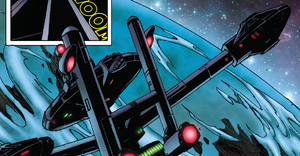 The Aerian Administration Hub is a space station around the colony Aeries in 7346.

Councilor Osiris oversaw his business dealings and other matters from this locale, alongside his aide, Diana.

As an Administration Hub, access to the famed Aeries datanet was a key factor, allowing Diana to intercept Boomer's attempts to use the datanet to decode McKintosh's incriminating information regarding Osiris dealings with the Cylons in relation to the attack on Umbra in 7322.

After various unsuccessful attempts to kill Starbuck over this incriminating information, Osiris invites Starbuck aboard in an attempt to assess the threat personally. After discovering that Starbuck was indeed a threat, Diana uses a glass with Starbuck's DNA along with a half-smoked fumerello to frame the Warrior for the murder of a scorned ex-girlfriend (Battlestar Galactica: Starbuck 2).

After Starbuck is arrested on fabricated charges and incarcerated aboard the Hub, Baltar allows the use of Penance to trojan horse both Apollo and Starbuck's Viper into the Hub, allowing Apollo to rescue Starbuck before he is transferred to a place "off the map," and thus likely to never be seen again.

The Warriors blast away Penance's hull plates, escaping from the Hub in their Vipers (Battlestar Galactica: Starbuck 3).