This article covers the various depictions of the Original Series' Adama from the tie-in novelizations, comic books, and other media.

Before assuming command of Galactica, the Caprican Adama attended the Academy with Baltar. During his tenure at the Academy, Adama and Baltar often met during Academy Chorus practice, where Adama was reputed to have a vibrant bass-baritone. Adama's abilities brought him both praise and the attention of various females, which caused Baltar to be envious, up to the point where Baltar attempted to out-do Adama by modifying the Academy's testing computers. Baltar was summarily ejected from the Academy, despite Adama's attempts at intervention (itself only further fueling Baltar's hatred for Adama).[1]

Upon receiving command of Galactica from his father[2] roughly two years after Apollo's birth[3], Adama kept a detailed computer journal chronicling his experiences aboard the ship that he showed no one, until it was seen by Boxey, who would command the last surviving battlestar after Adama's death.[4]

Adama would outlive both his sons, Zac and Apollo, a fact that pained Adama greatly.[4]

Adama is a Colonial Warrior serving in the Colonial Fleet. A war veteran, he eventually rises through the ranks to become Commander of the last surviving battlestar, Galactica, leading a rag-tag fugitive fleet on a lonely quest: a shining planet, known as Earth.

Adama is military leader of the Colonial Fleet up until the disastrous first contact with Earth, which results in his death (Galactica 1980 1).

After leaving Kobol, Commander Adama uses the memory inducer in an attempt to recall, with clarity, the inscriptions at the tomb in order to convince the Council to continue its journey to Earth. During this time, he is vulnerable to attack: Sire Uri convinces the Council to give him the presidency, and later has an attempt made on Adama's life. However, in the attempt, the controls to the inducer are damaged beyond repair, thus effectively trapping Adama inside the machine until Adama himself can find away to extricate himself from not only his memories, but the machine itself (The Memory Machine, All Things Past and Present).

While inside the machine, Adama relives memories of his duel with Baltar 25 yahren ago at the Colonial Fleet Academy on Caprica (All Things Past and Present). He also relives his mission to Scorpia to escort its ambassador, and the confrontation of his own prejudices against artificial intelligences (Shuttle-Diplomacy!) and, later, as Galactica's commander, where he almost destroys the living planet, an incident that almost lead to his resignation from the Colonial Fleet (This Planet Hungers).

Eventually with Eurayle's help, Adama is able to extricate himself from the machine and help defend both the Fleet and Scavenge World from a devastating Cylon attack lead by Lucifer (The Trap!, Collision Course!).

After the attack is over, Adama has Uri arrested for trial (Collision Course!). 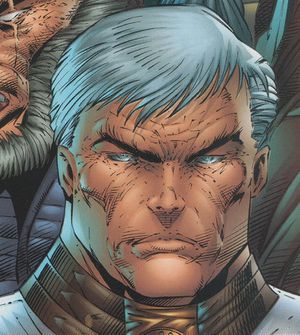 Five years after fleeing the Twelve Colonies, Adama succumbs to Kaitai syndrome. After Apollo returns from the Ship of Lights with information on the temporal overdrive technology, Adama is placed in suspended animation until reaching Earth, per his last order.

After arriving at Earth and their discovery of an odd-pyramid shaped object by a landing party, President Tigh and the Council retrieve Adama from suspension, despite Commander Apollo's reservations. After retrieving artifacts that Adama himself saved from a museum on Caprica, he is able to open the object—which is revealed to be an ark that houses Adam and Eve, two of Kobol's original humans left in hibernation. When Adama and his landing party receive word that the Cylons have managed to follow them to Earth—thanks to Count Iblis—Adama and Apollo bid farewell to one another, in the event that things turn badly. Staying behind on the ark, Adama continues to help Adam and Eve, as well as seeks to understand the technology aboard the ship. During the Cylon attack, he protects Adam from being slain by Baltar, who is transported to Earth by Iblis's power, and dies as a result when Baltar shoots him (War of Eden 1—4).