This issue begins one week after the events of issue #7, when Adama was trapped in the Memory Machine. Boomer, Athena and Starbuck, on recon patrol, stumble across Scavenge World, a planet composed entirely of spare parts and inhabited by alien scavengers. Boomer and Athena fall under some kind of mind control and land. Starbuck, unaffected, lands with them and briefly escapes from the aliens. On the run, he hides by joining a poker game where he wins the General's insignia. Soon he is captured as well. Boomer and Athen are brought before the throne of Eurayle, the leader of the scavenger "family" where they find "General" Starbuck at her side. Starbuck makes a deal with Eurayle to spare the Colonial fleet in exchange for helping her lead the Cylons into a trap. Meanwhile, the Galactica is buffeted by a unexpected Cylon attack. The Cylons are momentarily averted, and the Fleet arrives at Scavenge World. Learning of Galactica's situation, Eurayle makes a proposal - she will use her powers of the mind to free Commander Adama from the Memory Machine, if she can receive Lieutenant Starbuck in return.

One of five issues, along with "The Trap!", "Collision Course!", "Berzerker" and "The Daring Escape of the Space Cowboy" singled out as above-average by reviewer John Dorsey in an article on battlestargalactica.com. 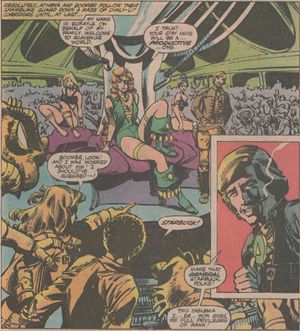 Athena and Boomer discover Starbuck... General Starbuck that is! 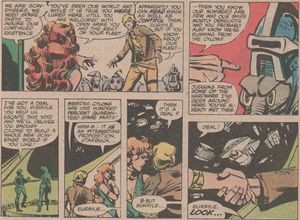 Starbuck makes a deal with Eurayle to spare the Colonial fleet... 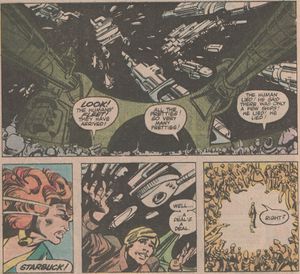 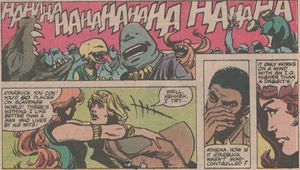 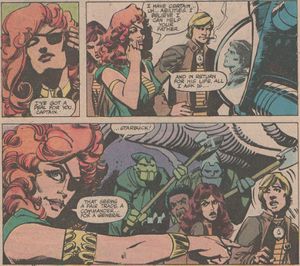 Eurayle offers to help free Adama from the Memory Machine... for a price!