All Things Past and Present

In an attempt to search for details on Earth inside the memory inducer, Adama recollects dueling with Baltar in his past. Now that Sire Uri has secured the presidency of the Council, he has his men execute an assassination attempt on the defenseless Adama, which is thwarted—but the controls of the machine are damaged in the fracas, perhaps trapping Adama inside it forever. 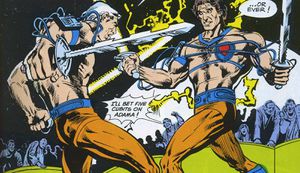 Adama duels Baltar in the past.