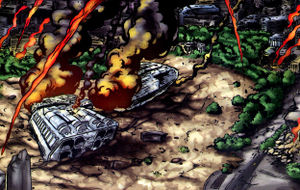 Galactica's remains on Earth after the nuclear strike in 1980 C.E.

Earth is the planet settled by the human descendants of the Thirteenth Tribe and was known to the Colonials only through Kobollian scripture.

In the Earth year 1980 C.E., the Colonials discover one of two Voyager spacecraft from which Doctor Zee learns about the current development of the humans there, as well as Earth's location. The Quorum of Twelve and Commander Adama discover that, much to their chagrin, Earth's population, society and technology are primitive by Colonial standards. This presents its own set of dilemmas, undoubtedly successful Cylons invasion and visceral, primitive reaction to the Colonials from their Earth brethren among them.

Zee advocates forced colonization of Earth by conquest, indicating that Earth's population was too primitive to deal with on any peaceful level and that any attempt to do so would undoubtedly cause planetary panic. Adama vehemently refuses this recommendation, instead opting for attempt at peaceful contact with the continent that sent the Voyager probe. The Fleet sets sail for Earth and Adama attempts to contact the humans of Earth by having Galactica take position over the White House, in the United States of America. Despite attempts at communication with the people below—communications that appear unreceived for reasons unknown—for 67 centons, Adama and Galactica's crew are horrified to discover a sudden nuclear attack on the battlestar, which mortally damages the ship and forces its crash upon Washington, D.C..

The resultant devastation is massive to America's capital (Galactica 1980 1), yet other adverse cultural and sociopolitical affects are unknown.

Located somewhere in the United States, Mount Weather serves as the United States of America's government continuity bunker, in the event of a large-scale attack against the country (Galactica 1980 3—4).

In the aftermath of the Battle for Earth, the complete loss of all Fleet ships and the continuance of the Cylon threat results in the creation of a new ship. With limited resources available on Earth, they can only build one ship: a battlestar named Adama. Six quatrons later, Adama is undergoing construction at a shipyard in Guymon, Olkahoma, United States (Galactica 1980 4).