This is an overview page on the subject of Viper fighter craft. For detailed information, see Viper Mark II and Viper Mark VII.

The Viper is the primary attack/interceptor vehicle in use on the Twelve Colonies with a wide range of both atmospheric and space capable craft dating back to before the First Cylon War. 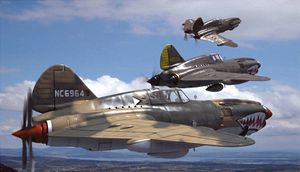 The history of the Viper can be traced back to before the Cylon war, where propeller powered, and later, jet engine powered Vipers were utilized by colony based air force organizations, prior to the unification of the Colonies. 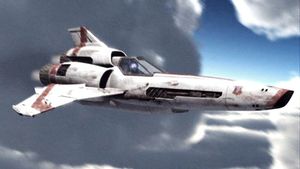 After the outbreak of the Cylon War, and the unification of the Colonies, the Viper Mk. II became the colony-wide service plane of choice, serving with distinction throughout that conflict. By the end of the war, the Mk. II was being phased out in favor of the Mk. III, however the Mk. II still continued to see action, even up until the Armistice. The Mk. II is later chosen for preservation in the Battlestar Galactica Cylon War Museum, following its decommissioning nearly 40 years since the end of hostilities (TRS: "Miniseries"). 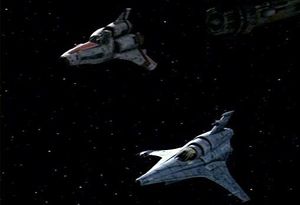 By the time of the Fall of the Twelve Colonies, the Viper Mark VII has taken up the mantle of the Mark II. However, due to its advanced construction and computer system, the standard Mark VII is vulnerable to the Cylon computer virus. Most of these are destroyed by the Cylons, who break in, and shut the Viper's computers off. A few remain with the fleeing Colonials, only after having their computer systems purged of the offending software (TRS: "Miniseries").

The Viper is designed to operate in both space and atmospheric conditions.

In space flight, the Viper is highly maneuverable, dangerously so in inexperienced hands. Reaction control system (RCS) thrusters for rapid and flexible attitude control, a cluster of 3 main thrusters for high acceleration, and retractable reverse thrusters housed in both port and starboard cowlings for some degree of deceleration can subject the pilot to punishing g-forces. Its retractable landing struts can be magnetized to secure the Viper on metal decks and surfaces in zero gravity.

In atmospheric flight, Vipers consume more Tylium fuel than in the vacuum of space. Once in an atmosphere, the engines must run continuously to maintain sufficient airflow over the wing lifting surfaces. Depending on the composition of the atmosphere itself, this can place severe strain on the Viper's engines (TRS: "You Can't Go Home Again"). In addition to greater fuel consumption, the high wing load (i.e. small wing area relative to weight) may compromise the Viper's overall maneuverability. Because the smaller wing surfaces generate less lift, higher speeds are needed to stay aloft. The fighter's RCS thrusters might partially compensate for this.

Viper cockpits are pressurized and heated, and pilots wear flight suits which, along with a breathing pack housed within the back, provide full life support should ejection be required (TRS: "You Can't Go Home Again)". In atmospheric ejections, the seat jettisons automatically once clear of the Viper, exposing a parachute which is deployed at a safe altitude (TRS: "Act of Contrition", "Razor").

Viper cockpits are also hardened against radiation, including a canopy made of a radiation-resistant glass and is capable of protecting a pilot against radiation levels that would kill a healthy human in 30 seconds (Blood and Chrome)

Because of the stamina required to operate Vipers, battlestars have a specialized weight room where the pilots maintain their physical condition.