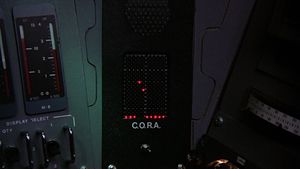 CORA is an acronym for "Computer, Oral Response Activated."

CORA is an advanced flight computer installed in Recon Viper One, designed to not only assist the pilot in flying during long patrols, but also keep him entertained.

CORA's voice is distinctly feminine, and it exhibits a flirtatious demeanor when interacting with Starbuck. Despite the apparent advanced intelligence of the unit, it fails to prevent Robber from stealing the Recon Viper, even assisting him by flying as he directed.

Capable of maneuvering the Viper extremely competently and precisely, Starbuck has CORA perform a maximum-G climb that causes a Cylon Raider to crash into the planetoid Proteus (TOS: "The Long Patrol").

CORA is said to be equipped on Galactica's recon Vipers and is "uniquely able to derive and execute ultralight evasive maneuvers through instantaneous analysis of up to five hundred attackers". CORA's ability to interact with the Viper pilot via "two-way voice communication" leads "many pilots to coment (sic) that the system has a 'personality' of its own".[1]