After Pegasus thwarts Baltar's attack on the Fleet, Commanders Adama and Cain plan to attack Gamoray for its desperately needed fuel supplies, in the midst of this is a visit from the Imperious Leader himself. 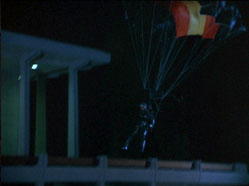 Parachuting to the surface of Gamoray.

Starbuck: With support troops like this, who needs Cylons?

The Berkely novelization, considered a separate continuity source, adds a lot of nuances and details on top of the story established in the two-parter. More here.