This article is concerned with the Cylon process of boxing. Boxing, a sport and martial art, is featured in the episode "Unfinished Business".

If you are looking for the character of Box (a.k.a. Boxey) from the Maximum Press comics, see Boxey (alternate). 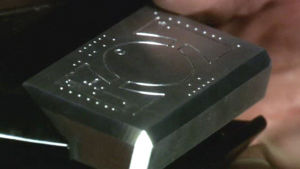 To box a Cylon is to download a particular humanoid Cylon's consciousness from his or her body into cold storage indefinitely (analogous to a computer core dump), presumably in an inert state. To a Cylon, boxing is much like true death, except that boxing is relatively easy to reverse if the Cylons who carried it out change their minds.

Boxing is carried out during the Cylon resurrection process. A small metal box on the side of the tank, the storage unit, is removed by an attending Cylon once the consciousness has been downloaded into it, and the Cylon body in the tank deactivates. The body is then moved to storage in a Resurrection Ship. The attendant may as a courtesy allow the condemned Cylon to resurrect long enough to inform him or her of the boxing before carrying it out.

A Cylon is boxed when he or she has been found dangerously unstable, such as when a humanoid Cylon's memories appear "corrupted" by extended or intense human contact, or when a sleeper agent becomes psychologically maladjusted from denying his or her Cylon nature.

When John Cavil took control of Cylon society, he killed the Final Five--Saul Tigh, Ellen Tigh, Samuel Anders, Galen Tyrol, and Tory Foster--by asphyxiation and then boxed them rather than letting them resurrect. Cavil eventually unboxed the Final Five, but when he downloaded them into new bodies, their true memories were intentionally blocked as part of his plan to teach them the error of their ways (TRS: "No Exit").

The resurrected Cylons Caprica-Six and Sharon "Boomer" Valerii are threatened with boxing by a Number Three shortly after their return. Their "Hero of the Cylon" status and extended human associations threaten the Cylon status quo because the two became individuals, their personalities diverging from their fellow models (TRS: "Downloaded").

Similarly, a Cavil infiltrates the resistance on Caprica and, as a result of observing and questioning the humans, comes to the conclusion that the extermination of humanity was a mistake. In order to contain this heresy, Galactica copy promises to have him boxed once they are resurrected (TRS: "The Plan").

After an incident at the Temple of Five, in which the same Number Three who threatened to box Caprica-Six and Boomer goes against the will of the other Cylons, the decision is made to box not just her, but all Number Three models (TRS: "Rapture"). The boxing of the Threes is the first and only model-wide boxing in Cylon history ("Rapture" podcast).

All boxed Cylons are stored at the Resurrection Hub, a central facility which coordinates all resurrections. After learning of the existence of the Final Five in the human fleet, the Twos, Sixes, and Eights demanded the unboxing of the Threes in order to obtain the identities of the Five (TRS: "Six of One"), leading to the start of the Cylon Civil War (TRS: "The Ties That Bind"). The rebel Cylons and Colonials working as allies infiltrated the Hub to unbox the Three that had seen the faces of the Final Five before wiping out the Resurrection Hub, taking with it all the boxed Threes and all other boxed Cylons. (TRS: "The Hub").