Note: This article is protected from edits and kept around as an archive of the speculation that took place before the reveal of the final Cylon. See also Humanoid Cylon speculation/ColdBoot for another such page.

The Cylon evolution into twelve distinct humanoid models introduced a serious problem for the remnants of humanity in the Fleet. Early into the search for Earth, it seemed that anyone could be a Cylon, raising doubt and suspicion within the human populace. The Fleet's leadership withheld this information from both the military and civilian population, but these facts were eventually revealed carefully. As a result of these revelations, suspicions ran high and both conspiracy theorists (such as Sesha Abinell) and peace activists (Demand Peace) began cropping up in the Fleet.

However, since Cylons are virtually indistinguishable from humans, Gaius Baltar was commissioned to develop a Cylon detector after successfully outing Aaron Doral as a Cylon agent, despite the fact that Baltar's "evidence" was fabricated and essentially a lie that just happened to be true.

While Baltar did develop a working Cylon detector, after he discovered that Sharon "Boomer" Valerii was a humanoid Cylon, he lied and told her that the detector identified her as human. Since her revelation as a Cylon, the detector is falsely believed by the humans of the Fleet to not work.

Fans of the show are rife with speculation about who could be a Cylon infiltrator in the Fleet. Viewers were introduced to the "Significant Seven" over the course of the miniseries and the first two seasons, but the nature of each of these characters was revealed shortly after that character's introduction.

In season three the speculation by both characters and fans turned to the Final Five, enigmatic, almost-mystical figures who seem to have a link to ancient Colonial history. The nature of the five, according to Moore, is "fundamentally different" from the other seven models[1].

At the conclusion of "Crossroads, Part II" four recurring characters are revealed to be Cylons. The revelation that long standing characters such as Colonel Tigh and Chief Tyrol are Cylons blows the field wide open; if they could be "toasters," then anyone could be the last Cylon. In particular, Tigh has a long and well-documented character history dating back to the first Cylon War. Further, the confirmation from a unboxed Number Three, the last of her model line, that there are only four of the Final Five in the Fleet has eliminated all suspects within the Fleet at the time of that pronouncement. Further, Ron Moore has confirmed that the Last Cylon is not in the infamous "The Last Supper" picture which eliminates all the major characters (including Laura Roslin and Gaius Baltar, both on the Cylon baseship at the time of Three's declaration).

During a Q&A session on the official Sci Fi channel Battlestar Galactica forum Ronald D. Moore notes that he already knows who the last Cylon is, and that he's already left clues as to who it is[2].

Bradley Thompson was asked when the writers knew the identity of the final five:

"Four of the five were recent. If memory serves, the fifth (which may change) we've been kicking around since about the end of Season One."[3] 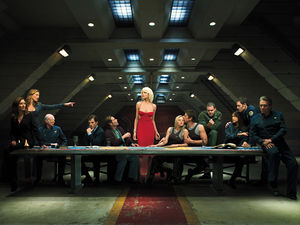 Further, the January 2008 edition of Entertainment Weekly showcases a two-page photo of the cast for Season Four posed in a manner similar to Leonardo DaVinci's The Last Supper with an explanation of each character's pose/position provided by Ron Moore. Near the far left of the table a space is left vacant and a cup sits on the table marking the absent character's intended place. Moore tells EW that "We have not yet revealed the final [unknown] Cylon." and when asked if there was a possibility that the final Cylon was indeed not seated at the table Moore notes "You ferreted that out pretty slyly. I didn't really want to give that away."[4] William Adama, Laura Roslin, Lee Adama, Gaius Baltar, and Kara Thrace are all present in the picture, as are Final Five Cylons Saul Tigh, Galen Tyrol, and Samuel Anders.

However, while it is true that the importance of this photo is seriously put to question by both Aaron Douglas and Katee Sackhoff, Moore later explicitly confirmed that the final Cylon is not in the picture to journalist Maureen Ryan after the airing of "Revelations".

In terms of narrative, to prevent an anti-climax it seems likely that the final Cylon would probably need to be a more prominent character than those of the Four. This centers the spotlight in the central "human" characters (Roslin, William and Lee Adama, Baltar and Starbuck). However, there is still half a season for characters to develop and gain significance with viewers.

With the Final Five being "fundamentally different" from the Seven, extrapolating any characteristics we learned of Cylons from the Seven (including physiology, loyalty or self-awareness) is of questionable validity.

Colonel Tigh has a well documented history stretching back at least to the first Cylon War. Also considering the Temple of Five it seems Final Five Cylons somehow significantly pre-date the Seven.

It has been seen that Cylons can start families, however it is unclear how the Five came to exist. Having known natural parents would seem to preclude one being any more than half-Cylon.

Of the 11 so far there have been only four female models. The final Cylon being female would serve to equalize this gender bias, although there still would be 7 male-gendered Cylons.

The first Hybrid gives a monologue about his knowledge of the Final Five in the extended version of "Razor". It states that the fifth Cylon, which is still in shadow, will come toward the light, hungering for redemption which will only come in the howl of terrible suffering.

With the exception of Karl Agathon and Cally Tyrol, who are confirmed to have half-Cylon, half-human children[5], any "human" character could be a Cylon.

In "Revelations", D'Anna Biers, mentions that there are only four of them in the Fleet. If this is true, then this would narrow the field to those characters who were on the rebel basestar at the time, characters previously assumed dead or missing, or other more esoteric suggestions.

As all the major characters have been eliminated, in addition to those in the Fleet as of "Revelations", the prevailing theory is that the Fifth is either on the rebel baseship or elsewhere in the galaxy.

Therefore, the following remain likely to be Cylons:

Sharon Valerii is a unique case, given that she has broken away from her model line by voting for the lobotomization of the Raiders, a first in Cylon history. Further, she has grown to disdain humanity as a result of what transpired on New Caprica, and, while given the duty to take care of Hera Agathon, she later attempts to kill Hera as she views the child as a mistake.

Valerii has since made it a point to go against the grain of Cylon society, inciting a civil war and accompanies Cavil to the Resurrection Hub to resurrect Number Three in the attempt to stop it. Further, she satisfies many of the pre-existing conditions, including:

The only downside to this theory is that Valerii is part of the Number Eight model line. However, given that the Final Five are "fundamentally different", this yet to be explained fundamental difference may be able to explain this. Further, none of the Final Five have model numbers, and are thus outside the Significant Seven's mainstream; the Five may have infiltrated Cylon society as well in some way, just the same way Tigh and the others were able to infiltrate human society dating back to at least 30 years pre-Fall.

The virtual beings (possibly including the virtual Leoben) may actually be a single entity, the final Cylon being more spiritual than corporal. Virtual Six claims to be an angel from the Cylon God, which could be roughly correlated with the "the five priests devoted to the one whose name cannot be spoken" from Pythia. The overall actions of these beings seem to be neither pro-Cylon or pro-human, which fits with the Final five being a third party in the dynamic of the battle.

None of the other final five have shown similar characteristics to this, and there is no particular reason to suggest the final Cylon is greatly different from his or her four "siblings". When Number Three sees her vision of the final five in the Opera House (a vision repeated for other characters, thus not simply in her mind) they are five humanoid figures in white robes, at least one of which is known to her.

The final Cylon is: