Identity of the Final Five

Out of curosity, how long have you guys known who the final five are? I know Ron Moore's made comments that indicate that these were more recent decisions, but I was just curious at what point did you guys decide on who were going to be Cylons, and what really went into that decision. Thanks! ColonelKevin 16:55, 27 March 2007 (CDT)

I believe that the T27nn numbers are internal Warner Bros. numbers for the Comcast tapes that they made and fed to Comcast. I believe the 030nn numbers correspond to the production office assignments to the episodes, i.e., where 03019 is the production number for 'Crossroads, Part 2'. Thanks for helping in clearing this up.Vidiot 01:11, 29 March 2007 (CDT)

Thank you for your efforts! Interesting how an episode can have so many different numbers though... Gotta love paperwork! -- Joe Beaudoin So say we all - Donate - Sanctuary Wiki — New 19:26, 16 June 2007 (CDT)

Although we've been flooded with Cylon identities lately (we now know 11 of the 12 models), we still know only four numbers (Three, Five, Six and Eight). Could you enlighten us as to the numbers of the other seven known Cylons? If you can't tell us that, can you at least tell us whether these numbers will be revealed in Season Four? It would also be interesting to know if the one remaining Cylon is indeed Number One, as we suspected. Thanks in advance. --Catrope(Talk to me or e-mail me) 11:24, 29 March 2007 (CDT)

Centurions and the final five

We already know Centurions are hard-coded not to hurt the Significant Seven. Does the same go for the final five? --Catrope(Talk to me or e-mail me) 11:51, 29 March 2007 (CDT)

They've also shot at Athena, though in neither case have they hit the target Cylon. Also, it hasn't been stated that they are hard-coded to not hurt the Seven (unless ordered, as by Three), only that they aren't sentient enough to rebel against them. -- Noneofyourbusiness 21:34, 8 April 2007 (CDT)

Alright, rephrase: do the Centurions 'know' the final five? Would they take orders from them? Or are they just as ignorant as the Seven? --Catrope(Talk to me or e-mail me) 04:17, 9 April 2007 (CDT)

To be fair that's actually quite the assumption; the Significant Seven don't know who programmed them, so I don't think it's a stretch to consider that they don't know who did the base program of the Centurions either. There's enough to go either way with it, so I think the question given here is a valid one. ColonelKevin 15:54, 10 April 2007 (CDT)

Hello, Mr. Thompson. Given the recent revelations about Tigh a lot of people have become interested on when he met Adama, but when we look back we have 2 conflicting sources. So I was wondering if you could maybe tell us which is considered to be the real one? Without revealing anything of course.

Now, we saw them meet in the flashbacks in “Scattered”, which are mentioned in the podcast [1] to be 20 years before the miniseries, and this also seems to fit with how they look and such.

However, in “Torn” Adama says he has known Tigh for 30 years, and though admittedly it’s now technically 22-23 years after their official meeting, “30” is still a long way. It’s quite possible that Adama was dramatizing for the purpose of connecting to Tigh, but either way it creates doubt.

Spelling of carom and meaning of DRADIS

There has been some debate recently as to how carom is spelled. Some say carom, some karam, and some charagm. The subtitles spell it as carom, are they right? How do the scripts spell it? --Catrope(Talk to me or e-mail me) 02:32, 16 April 2007 (CDT)

And for that matter, do you have consistent meaning of "DRADIS"? We currently have "Direction, RAnge and DIStance" which fits with recon photography, but is somewhat redundant. Someone suggested "Direction, Right Ascension and DISstance" which would fit as well. --Serenity 06:46, 16 April 2007 (CDT)

I thought DRADIS meant "Direction and RADial DIStance," which would make perfect sense.

Roslin and the Admiral

Following on from the discussion at Talk:Humanoid Cylon speculation... in the frak party podcast, RDM said that he decided against Mary and Edward being in the four revealed Cylons because it would take something away from the series. Does this mean that unequivocally the Admiral and Roslin are not the final Cylon? --SSH 04:32, 26 April 2007 (CDT)

In a previous article there seemed to be a writing staff debate on what the various types of capital and Viper guns were...some people on the staff appeared to prefer railguns and some chemical weapons. You can plausibly have both in the setting, here's how and why.

The only needed science is that real world railguns can theoretically acheive higher muzzle velocities than chemical weapons, but the electrical power sources for a rail gun are very large and heavy. So:

-Vipers and Raiders would carry chemically propelled rounds b/c they cannot mount the necessary power supplies. Also, they do not need the higher muzzle velocities of railguns - Vipers have higher closing velocities on their targets...ie. the Viper's drives provide aprt of the shell's velocity.

Your art staff needn't worry either, actual railguns produce visible muzzle flash due to the vaporization of portions of the round Auburn railgun firing

Dear Mr. Thompson, the first S4 casting information has surfaced. The sheets say #401/402 "Razor" will feature Young Helena (Cain?) and Helena's father, among others. Could you please clarify whether this information refers to the TV movie about the Pegasus or to the genuine S4 premiere? -- Pedda 17:20, 3 May 2007 (CDT)

What I find interesting is that they are casting the role of the Hybrid (probably a Basestar CPU Hybrid, but it could be something else), meaning it may be someone other than Tiffany Lyndall-Knight. -- Noneofyourbusiness 11:50, 20 May 2007 (CDT)

Even the Sci Fi Channel can err, and has. That same article shows character names, and most of them are incorrectly spelled. Such information has changed at the last minute before, and trying to "lock" it down before the episode is advertised on-screen is likely to burn us. Right now, the movie article has a redirect link with this title, so for now we'll just leave things as-is for the article. --Spencerian 23:14, 3 June 2007 (CDT)

The same source cited above by Pedda also names "He That Believeth in Me" as the title for the first Season 4 episode. Is this name correct? Is the misspelling intentional? TIA. --Catrope(Talk to me or e-mail me) 09:10, 21 May 2007 (CDT)

Hi. I am curious in how this effect was produced, namely the effect heard in various scenes such as the Galactica communicating with its fighters as well as the wireless stand off dialog between Adama and Cain. Due to the rather offside nature of this question, I am aware that it is unlikely to find a guide of such, but I do seek ways in producing this somewhat interesting effect for things like fanmade game mods - for this effect does provide a very indepth feeling of using "antique" tech. I am referring to that double tone disorted voice during speech over commlines. Thank you for any hints, links, advicce. I "apollo"gize ;) for the unusual question - I hope it is not too far out what I am asking. On the side note, I must say being a writer for BSG must be fun, wish I could something alike. --Lork 06:05, 31 May 2007 (CDT)

It's a great question, one that the sound and post guys have proudly explained to me -- they actually transmit the dialogue over a wireless and record the result from the receiver. The static, though controllable, is the real deal. And yes, writing for Battlestar is the best job in the world. - Ngarenn 22:31, 15 June 2007 (CDT)

It's the distortion from transmission using single-sideband modulation. FM and AM don't produce that sort of distortion. Ham radio guys know all about it. I'm not sure it can be faked for a game mod but you may be able to get some hams to help you out. Mward 08:35, 17 June 2007 (CDT)

Well, technically SSBM is a special case of AM. The most simple way to get a single-sideband is passing an amplitude modulated signal through a bandpass and thus removing one of the duplicated sidebands. --Serenity 08:47, 17 June 2007 (CDT)

I wasn't attempting to explain it, just identify it. I figured the original poster could look it up. Doing that sort of conversion in a computer won't result in the distortion you hear on the show. That's caused by being slightly off-frequency or fiddling with the tuner while transmitting or receiving. As far as communications go, it's not very hard to tune a radio and so the effect on the series is kind of out of place. I doubt you could chalk it up to relativistic doppler effect since most of the time the 2 ships transmitting aren't moving at appreciable fractions of light speed away or towards eachother. However, I will say as a fan, the cinematic effect is really cool and adds to the air of techy spaciness the show has. Mward 09:31, 17 June 2007 (CDT)

Due to the discussions along Talk:Night Flight and this Sci Fi thread (New battlestar name discovered), I'm rather surprised no one bothered confirming this just yet: In the episode, Home, Part I, two battlestars are mentioned in Adama's paperwork 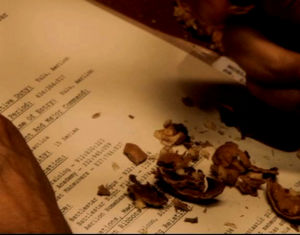 The battlestar's name on a personnel file.

: Night Flight and the other, through analysis, to be Erasmus. Do you know if Erasmus is correct and if you know of any other information concerning these choices (quite frankly Night Flight reminds me too much of Knight Rider). DrWho42 23:14, 17 June 2007 (CDT)

The Art Department, who comes up with all this stuff, is very creative. Wait till you see the magazine about paragliding on Scorpia - Ngarenn 23:26, 17 June 2007 (CDT)