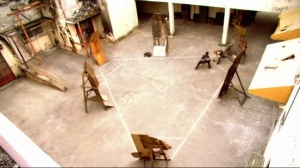 Pyramid[1] is a popular professional-league sport watched throughout the Twelve Colonies of Kobol (TRS: "Miniseries") and is also popular aboard Colonial warships (TRS: "Litmus"). Teams include the Caprica Buccaneers, Picon Panthers and Tauron Bulls; its players, such as the Buccaneers's Sue-Shaun and Samuel Anders, are considered sports heroes.

Pyramid is a close quarters ball game played on a pyramid-shaped court, hence the name of the game. The objective is apparently to score points by getting the ball into a goal at the top of the pyramid. Pyramid can be played one-on-one or in teams.

Players can take no more than "three paces" without passing, shooting, or rebounding the ball off of one of the walls. The outlined areas in the corners and the center of the arena are "neutral zones". When a player places the ball in these zones, other players must back off and may not make contact[2].

Full contact is allowed (when the ball is not in a neutral zone), and once a player has been tackled, they must pass the ball. How this is handled in one-on-one games is left unspecified. The game is won by the team with the most points at the end. However, under what circumstances the games ends is also left unspecified[3].

There are versions of pyramid for one, three or five players from each team on the court at once[4]. The play area is consistently referred to as an "arena" and the corner with the goal as the "head". Apparently each team starts out in one of the corners besides the head and then vie for control of the ball. The initial ball placement is not defined, but a face-off is mentioned tangentially later in the article with no details.

Despite the small size of the regulation pyramid court at Delphi Union High School (TRS: "Resistance") and the practice field used by the Caprica Buccaneers team just before the Fall of the Twelve Colonies (TRS: "The Plan"), the home of the Buccaneers fifty-eight years earlier, Atlas Arena, offered a much larger professional playing area. The relationship between the two is unclear, but it is possible that the regulation court may be considered a segment of the larger professional field. If this is true, while teams consist of over eight people, it is probable that the sport rotates players on and off the smaller court between plays. Three players per side within this area are a probable arrangement. Non-professional play (high school and collegiate, for instance) may have fewer players than the professional teams, indicating a skill factor needed to play with a large number of athletes. 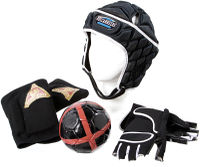 The ball is cantaloupe-sized, about the same size as a soccer mini ball. The ball's size, combined with the cupped structure of the goal mean that outside (towards the side-lines) shots are quite a bit more difficult than inside (towards the center of the arena) shots. However, the more inside a player gets, the more likely the defensive play. This defensiveness is why pyramid is so physical: battling over the good shooting space directly in front of the goal.

For purposes of clarity, this section is split up into pre-Cylon War and post-Armistice. This is due to the fact that some teams may not have survived beyond the end of the Armistice, given the scope and depth of the Cylon War and its affect on all aspects of Colonial civilization.

The following teams are professional pyramid teams that are known to have existed 58 years prior to the Fall of the Twelve Colonies and played for the CPL KOBOL CUP. It is not known whether these teams existed after the end of the first Cylon War.

The Delphi Legion are scheduled to play the Caprica Buccaneers at Atlas Arena when U-87s attached to the Caprican Marines land at the stadium in their first public combat role, attempting to stop a Soldiers of the One terror attack (CAP: "Apotheosis").

A month after the Lev bombing, they face off against the Caprica Buccaneers in a long awaited game at Caprica City's Atlas Arena. It is the first game after a "controversial victory" involving the teams that transpired over one year prior, as well as the first game that Daniel and Amanda Graystone spectate after the bombing (CAP: "Rebirth").

Baxter Sarno mentions a game between the Caprica Buccaneers and the Bulls on his show, Backtalk with Baxter Sarno (CAP: "Know Thy Enemy"). The Caprican later clarified this as "Bucs and the [Tauron] Bulls".

Existing for nearly a century before the Fall, the Buccaneers (also known as the "Bucs" or "C-Bucs") played in the CPL Inner Conference Alpha Division and was purchased by Daniel Graystone and, later, Tomas Vergis, both contributors to the creation of the Cylons. The team would later be captained by one of the Final Five Cylons prior to the Fall.

The Picon Panthers were rivals of the Caprica Buccaneers. Moments after C-Bucs player Samuel Anders disembarks from the Raptors that rescues he and his resistance group from occupied Caprica, Admiral William Adama playfully tells him that the Panthers were his favorite (TRS: "Lay Down Your Burdens, Part II").

Sharon "Athena" Agathon yells "Go Panthers!" while in Breeders Canyon on New Caprica to ascertain that the people approaching her position are Samuel Anders and the rendezvous party. Anders replies by yelling "C-Bucs rule!" (TRS: "Exodus, Part I").

A game called "Pyramid X"[5] which looks like the pyramid goal is set up in Joe's bar. Samuel Anders comments that it is nothing like the real thing.

...somewhere along the line I transposed the names. I misremembered what they called it and I- the sort of racquet-ball slash basketball game that they played in the original and that we referred to in this series, I now call Pyramid, and the name of that game in the original which was Triad is now what we sort of call our poker game. So it's one of those "Oh, it's one of the charming differences between the old and the new.", it's either that or it's just a stupid error that the writer made.