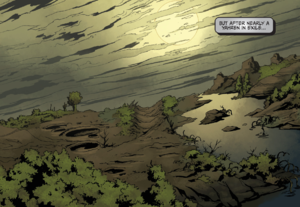 The jungle-like surface of the planet where Baltar is exiled (Battlestar Galactica Annual 2014).

Baltar's planet[1] is the world where Baltar is exiled upon, in fulfillment of Adama's promise to him resulting in the success of, and following, the Battle at Galaxy's Edge.

It is the fifth planet of an unnamed system, featuring a jungle where Baltar resides inside of a shipping container with basic supplies and a short-range transmitter. Its jungles feature edible food, similar to those of the banana, which Baltar acquires for sustenance.

A yahren into his exile, circa 7349, Baltar uncovers revelations regarding his modifications by the Cylons and is summarily abducted by Commandant (Battlestar Galactica Annual 2014).

Later, having been returned[2] to the planet, Baltar is "saved" by Iblis and transported to another planet as part of Iblis' trap to destroy his enemy (Classic Battlestar Galactica Vol. 3 #3).