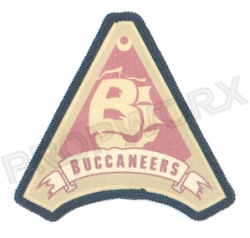 The patch for the Caprica Buccaneers.

58 years before the Cylon holocaust, the Buccaneers are owned by Daniel Graystone, inventor of the Cylon Prototype. Owning the Buccaneers had been a childhood fantasy of Graystone's. Graystone invited Joseph Adama and his son, William, to court-side seats weeks after Ben Stark's suicide bombing of the Lev claimed the lives of members from both families. After the game, Willie was sharply critical of the Buccaneers, noting that Rod Jenkins was responsible for losing the game he watched (CAP: "Caprica pilot").

The Buccaneers are undertaking high-altitude training in the mountains at the time of the Cylon nuclear bombardment of Caprica (TRS: "The Plan"). Shielded from the shockwaves and a bulk of the nuclear fallout, they manage to round up hikers and other survivors camping in the mountains into a sizable resistance force. From there, they siege supply depots, hospitals (for anti-radiation meds) and destroy Cylon convoys (TRS: "Resistance", "Resistance").

With her comments, Kara Thrace—who mentions to Anders later on that a "bum knee" robbed her of a professional pyramid career—either was not a fan of the team, or was a sharp critic. While questioning Anders' legitimacy at gunpoint, she demands that he tell her how many "foul breaks" the Buccaneers had in the playoff against Aerilon. Anders tells Thrace that one foul break was called back, after instant replay, suggesting a parallel to the National Football League, cricket, and other major sporting leagues, in which officials may review replays after a play before making a final decision (TRS: "Resistance", "Resistance"). Despite Anders' popularity and skill, the Buccaneers never won a championship while under his lead (TRS: "Daybreak, Part I").