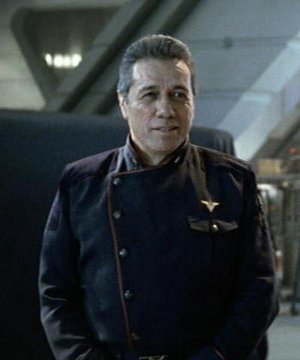 Officers are issued double-breasted dark blue duty uniforms, informally called "blues", which overlap to the right and are secured by a column of buttons. Darker blue patches are sewn to the shoulders and upper sleeves, with a round patch bearing the Colonial seal and the wearer's ship and battlestar group on the upper left shoulder.

Rank insignia are worn on both sides of the stand-up collar.

Pilot qualification wings when applicable are worn over the breast pocket on the left. These exist in two grades: "standard" and "elite"[1]. The latter might be awarded for significant flight-hours or senior command qualification (e.g. capital ship).

There are also other medals and awards that can be worn on the left breast of the standard duty uniform, particularly by high-level command and flag officers such as Fleet Admirals. So far, the only verifiable occurrence of this thus far is Admiral Peter Corman (TRS: "Hero").

Fleet officer uniforms have colored piping which denotes the degree of rank of the wearer:

Note: When he is promoted to admiral, Adama keeps his old commander's uniform. The gold/white piping can only be seen on Admiral Cain's uniform. 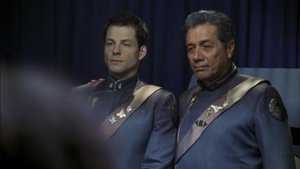 The officers' dress uniform, known as Dress Grays, is similar to the duty uniform with a few key differences. It is gray, features a leather sash to which flight wings and decorations are affixed, and lacks a pocket, shoulder patches and buttons.

Senior officers' uniforms also feature a piped, maroon strip around the neck. Whereas the duty uniform tunic is tucked in at the belt, the dress uniform tunic extends below the waist and features a waist belt of the same material as the sash. White gloves are worn on the most formal occasions like a visit by a head of government (TRS: "Water") or by honor guards at military funerals (TRS: "Act of Contrition").

Shoulder cords can be worn at the left shoulder[2]. William Adama's cord is white, while Colonel Tigh's is yellow. Both also have different braids; it is unknown if that is an indication of rank or position. A third type of shoulder cord, double white braid with one loop going through the sash, can be seen on some lower-ranking Pegasus officers at Admiral Cain's funeral (Resurrection Ship).

A special version is worn by the honor guard at the funeral in "Act of Contrition". Their sashes aren't made leather, but instead blue fabric. 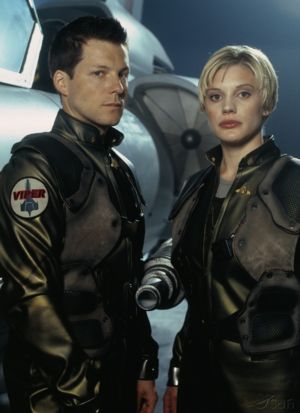 Apollo and Starbuck in flight suits.

Flight suits with left sleeve pockets are used by flight-qualified crew (pilots, ECOs, etc.). The flight suit is a life-support garment and can sustain the life of the pilot in hostile environments up to and including total vacuum and freezing temperature. Flight suits also have a metal collar that is attached to maintain an airtight seal between the flight suit and a helmet. Often, when not on a mission pilots wear the suit with the top half rolled down and hanging at their waist, revealing the t-shirt and tank top they wear underneath. It also has been used to make an air-tight seal in a vessel by filling in a hole in the hull (TRS: "You Can't Go Home Again"). Additionally, the flight suit has a chronometer mounted in a cuff.

Pilots and ECOs wear several patches on their flight suits: On the left shoulder a patch designating the ship they are assigned to, and on the right shoulder a patch for what craft they operate, usually a Viper or a Raptor. Moreover, a squadron patch is sometimes worn on the left breast under the outer layer of the suit.

Like the blue officer duty uniforms, the fatigue uniforms display the emblem of the Twelve Colonies of Kobol, and denote what vessel the wearer is serving on. Rank insignia are affixed to both collars.

The green uniform is worn by both officers in off-duty and informal situations, and enlisted crew as their regular uniform. A tan variation is worn by warrant officers. 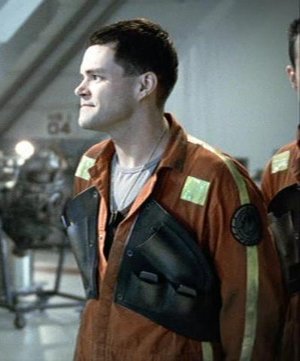 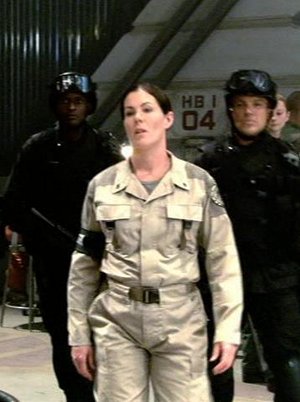 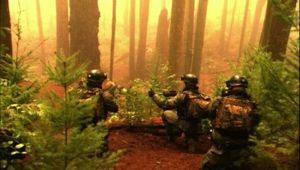 Marine NCO's (non-commissioned officers) wear a single-breasted tan fatigue with down-turned collars bearing rank insignia, and two chest pockets which are secured by clasps.[3] Like the Fleet officer uniform, it has darker-shaded patches on the shoulders. It is identical to the uniform worn by warrant officers but distinguishable by the rank insignia (silver and dark green versus gold).

Marines with special duties wear a black armband on the right upper arm with black lettering on a small square of white. An example would be Sergeant Hadrian who, as the Master-at-Arms, wears one reading "Security".

Apparently, there are no Marine officers left aboard Galactica (and possibly on Pegasus as well), as the only officer seen so far is Lieutenant Terry Burrell (TRS: "Sacrifice"). However, as Burrell is in plainclothes, no information about the Corps's possibly distinct officer's uniforms is available.

There are a number of possible reasons why the Colonial Marines serving aboard both Galactica and Pegasus are wearing solid black tactical uniforms instead of digital camouflage uniforms. One of the reasons why the Marines that serve with the Fleet are issued black combat uniforms could be due to the their role as security personnel aboard the battlestars as well as the fact the black combat uniforms are very effective in a darkened combat environment, especially in repelling any Cylon Centurions from raiding a battlestar (as in the Season 2 episode "Valley of Darkness"). Troops deployed to planets could use more specialized uniforms, but Galactica probably only has a very limited supply of these.

Ron Moore explained in a blog posting why the Marines do not have much uniform variation; it is primarily a budgetary issue:

Q: "Why do the "marines" on the show always wear a CQB (close quarters battle) gear loadout in all the episodes? Even in the ones where they are outdoors? Is it possible we might see a different "marine" gear setup? "

RDM: "It's primarily a budgetary issue. We've got the CQB gear, so it's cheaper and easier to keep using it week after week than it is to rent specific items for every mission or to buy a wide variety of gear for stock. There's also a costume issue in that we don't really have specific Marine uniforms, so we use variations of our existing "naval" uniforms for the Marines and distinguish them mostly through the use of the CQB gear." 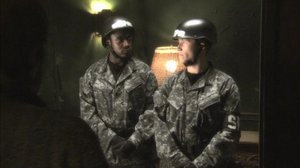 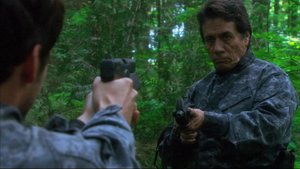 The battle dress utility uniform is an urban digital camouflage pattern of various shades of dark and light grays. It features angled breast and shoulder pockets and lacks abdominal pockets, and the buttons are covered. The elbows of the battle dress utility feature large patches. The boots are either typically bloused, with the pant legs tucked into the boots; or not bloused, with the pant legs left hanging over the boots. The uniform features a Mandarin collar which can be worn up for comfort in body armor or in a down position for appearance in other situations. This uniform has been in use in the Colonial Fleet for several decades (TRS: "Scattered").[4]

Black leather boots and hexagonal identification tags are used with all uniforms. All uniforms except for Colonial and Marine BDUs feature left-shoulder patches indicating their assigned vessel. 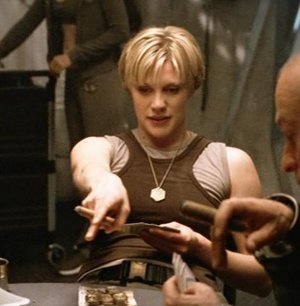 A gray sleeveless tee shirt covered by a brown tank top is worn beneath all uniforms, including at least the flight suit, the duty uniforms, BDUs, the deck crew work uniforms, and Dr. Cottle's coat (TRS: Miniseries, "Kobol's Last Gleaming, Part II", "You Can't Go Home Again" deleted scene). Gray briefs of the same color and material as the t-shirts, either in varying lengths or in different cuts for male and female personnel, are worn under the pants (TRS: "Scar"). 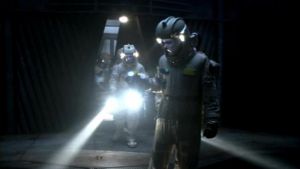 Space suits exist for extra-vehicular activity or work in sections of the ship exposed to space. When Colonial Heavy 798 docks with Galactica in in the Miniseries, two workers are hovering in the flight pod. These space suits can be seen close up in the episodes "Water" and "The Road Less Traveled".

Female systems analysts can wear a gray sweater dress-like uniform with a patch of an "Integral Systems Engineer". A gray jumpsuit also exists that is be worn be both genders (TRS: "Razor"). [5]

According to an interview with regular series costume designer Glenne Campbell[6], "The uniforms are made out of a very specific material, and we own all of that material that there is in existence -- they're not making this stuff anymore". Thus, for BSG fans that want to make their own costumes, it appears that it is technically impossible to make a complete recreation of the military uniforms on the series. As there are only a limited number of uniforms in existence, when someone gets shot, the production team usually tries to have it shot in such a way that the costume is undamaged. The crew uses a patch of cloth over the uniform that has the blood packs underneath, which is painted to blend in with the rest of the uniform; for example when Cally shoots Boomer in "Resistance".