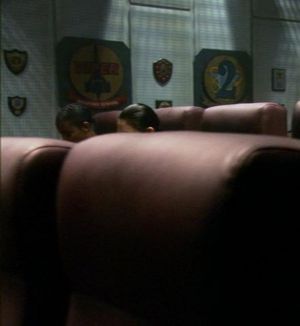 Numerous squadron insignia[1] are visible on the walls of the pilots' ready room on Galactica. The squadrons can contain both Viper and Raptor pilots, which comprise its air wing,[2] the sum of all Viper squadrons, Raptors and support ships assigned to a battlestar.

An air wing is commanded by the battlestar's senior pilot, the Commander, Air Group, or "CAG". The term air group is only used in the title of the CAG, as in practice the Viper and Raptor force is called "air wing" (TRS: "Pegasus") [3].

Squadrons are purely organizational in nature and probably also a matter of generating esprit de corps (positive morale) in a group of pilots. In combat, Viper squadrons are color-coded, i.e. Blue Squadron and Red Squadron, depending on the mission parameters.

An organizational chart in the episode "The Passage" shows that Galactica operates four squadrons with 10 to 16 pilots each. Each squadron has a mix of Viper and Raptor pilots [4]. The known squadron leaders at that time are Kara Thrace, Louanne Katraine and Ricky Richardson. After Thrace is presumed dead, Agathon rises to squadron leader as well (TRS: "The Son Also Rises").

Not all squadrons listed in this article are in active service. This is supported by the low number of Vipers on Galactica, as well as the availability of a single hangar deck and flight pod for missions. Together with the low number of pilots, this makes it probable that many squadron patches shown represent those that served on Galactica in its past, but have since been assigned elsewhere or disbanded. This is likely the case with Primus squadron, which served in the first Cylon War and whose patches might have been kept for historical or nostalgic reasons. Squadron 2 was a Raptor squadron that served in the first Cylon War (Razor Flashbacks, Episode 1).

The squadron patches are numbered in sequence beginning with 1 (Primus). The exception is the Viper Weapons School patch, a golden version of the standard Viper patch.

The Primus patch is visible in this old photo of William Adama.

Primus is the name of Galactica's 1st Viper Squadron.

William Adama was a member of this fighter group, in addition to other pilots from the Cylon War era such as Raymond Lai. The logo of this group is adorned prominently on the nose of many restored Viper Mark II fighters that were to occupy the Galactica Museum.

A photo of a younger William Adama and his two boys, Zak and Lee, shows the Primus logo on his jumpsuit and his old fighter, Viper 7242. 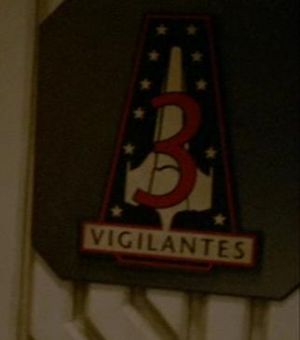 The Vigilantes, 3rd Viper Squadron, is a long-established unit in the Colonial Fleet before the Cylon attack. Given that the squadron's logo adorns a wall in the quarters of Colonel Tigh (a commanding officer long removed from pilot service), it is likely that Tigh served as a member of the Vigilantes as a Viper pilot in the first Cylon War.

Captain Kara Thrace is a member of the Vigilantes (TRS: "Act of Contrition").

Jackson Spencer, the former CAG of Galactica and "Jolly" Anders were also members of the Vigilantes. They were destroyed along with most of the squadron by Cylon Raiders during the Cylon attack on the Twelve Colonies. The only known survivors at this time are Thrace, who was in the brig for striking a superior officer, and the crew of the Raptor supporting the squadron, Sharon Valerii and Karl Agathon (TRS: "Miniseries"). It is unknown if the Raptor crew was part of the squadron or just assigned to support it, although a Squadron 7 Battleaxe crest in Agathon's quarters seems to suggest that he was once a member of that group (TRS: "Rapture").

The first class of nuggets fly as members of this squadron (TRS: "Act of Contrition").

Margaret Edmondson and Hamish McCall, Raptor pilots, are both members of the Vigilantes (TRS: "Lay Down Your Burdens, Part I").