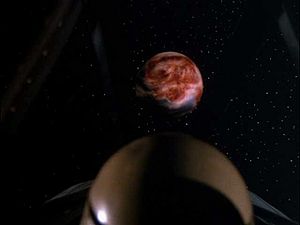 The red planet as seen from space (TOS: "War of the Gods, Part I").

The red planet[1] is the name for the planet where Count Iblis is discovered by the Fleet. It is thus named due to its oddity of having an intermittent visual shift in the red spectrum. 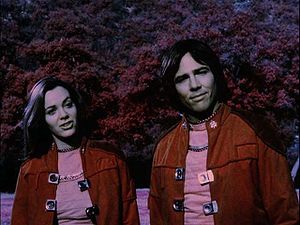 The visual shift in the red spectrum (TOS: "War of the Gods, Part I").

Upon landing on the red planet, Galactica Warriors Apollo, Starbuck and Sheba discover ruins of a large spacefaring vessel, which their instruments tell them that is highly radioactive. As they attempt to investigate, they are warned off by Iblis, who claims to have been a survivor yet has no recollection of what transpired.

Iblis is "rescued" from this planet by the Warriors, only to have Iblis undermine Commander Adama's control of the Fleet (TOS: "War of the Gods, Part I"). Adama's son, Apollo, returns to this planet with Starbuck to investigate the wreckage, in the hopes of finding out Iblis' true intentions and origins. Sheba, having freely given herself to Iblis, pursues and attempts to stop them from discovering that the ship once contained followers of Iblis who were lead to a bad ending.

Apollo is killed here by Iblis, after taking an energy blast meant for Sheba; this action leads to Iblis' removal from the planet by the Beings of Light, the survivors' first meeting with these entities, as well as Apollo's resurrection (TOS: "War of the Gods, Part II").