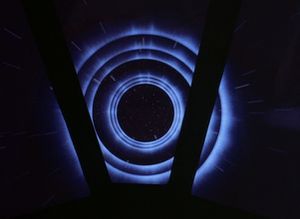 The time warp effect as seen from the inside of a Viper cockpit (Galactica Discovers Earth, Part II).

The time warp synthesizer is a device created by Doctor Zee to permit travel back and forth through time, which the Colonials consider to be the fourth dimension.

The device, small enough to be installed in a Colonial Viper, works on the principle that once a person exceeds the speed of light, one can travel back in time. Jamie Hamilton equates this to Albert Einstein's special theory of relativity, which Troy confirms is correct.

Travel through time is easily detectable, as their "scanners followed Xaviar's trail as clearly as if he'd simply walked across a meadow", according to Troy (Galactica Discovers Earth, Part II).

Xaviar proposes using the invention in order to advance Earth's development from the past, despite the fact that it has never been tested, nor do the Colonials know what side effects of time manpiulation will occur. He later does this against the wishes of the Council, which forces Adama to recall Troy and Dillon, so they may pursue Xaviar back to 1944 and stop him from giving the Germans advanced technology (Galactica Discovers Earth, Part II).

In the novelization by Michael Resnick, the synthesizer allows a ship or object to be moved out of normal space-time through a passage and into a universe of "non-causality". This "non-causality" universe is a realm without rhyme or reason: for instance, lights have no pattern and sounds have no source.

As a result, those people who are not properly conditioned for travel in the "non-causality" universe tend to pass out in order to maintain a semblance of sanity. Even in simulations, those undergoing conditioning tend to pass out; Dillon tells Jamie Hamilton that he was out for 3 hours after his first simulation. [1].