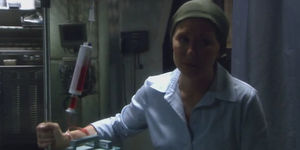 Roslin on the Doloxan treatment in "Faith".

Doloxan therapy is given as a cancer treatment option to President Laura Roslin by Doctor Cottle to battle her breast cancer.

Doloxan therapy is likely a form of chemotherapy. President Roslin tells Dr. Cottle of having her mother endure two years of Doloxan therapy as she wasted away, and therefore the President wanted to explore alternative treatments such as chamalla. Roslin's account of her mother's treatment, as well as her own experiences with the treatment later on, indicate that the side effects of Doloxan therapy (hair loss, nausea, muscle degeneration), like many chemotherapy options in the real world, may be just as debilitating and uncomfortable as the illness it is intended to cure ("Act of Contrition", "Six of One", "Faith"). These treatments are typically tiring and have a low success rate in dealing with advanced cancer patients, such as Roslin and Emily Kowalski (Faith), in addition to reducing the effectiveness of the subject's immune system (TRS: "Sine Qua Non").

This therapy must be taken without interruption, so as to prevent the cancer from reasserting itself before it is completely eradicated (Sine Qua Non).

When Roslin's cancer returns after apparently having been cured, she takes Doloxan treatments despite her earlier aversion to the drug (Crossroads, Part II). Before her abrupt abduction by the rebel Cylons basestar's hybrid, she is two treatments away from being finished with the Doloxan therapy (TRS: "Guess What's Coming to Dinner?").