The weapons depicted in the Original Series comprise mainly of laser-based technology and ordnance-like warheads.

The article attempts to explain how they work in relation to current real world technologies, using logical deduction and plausible speculation based on evidence presented in the series.

For an overview of various laser weapons and technologies, see: Laser.

Laser weapons are a form of directed-energy weapon. Most uses of lasers depicted in the Original Series act more like particle beams, since lasers would be too fast to be seen by the human eye, since they would travel at the speed of light. Additionally, true laser weapons would likely not be in the visible light spectrum, since shorter wavelengths are more energetic, and thus be invisible to the human eye.

In "Saga of a Star World", Apollo mentions taking out the Cylon Mines in the Straits of Madagon using laser torpedoes.

It is the only time that the weapons are referred to and visual effects look no different than regular lasers depicted during the series on.

However, even with the nomenclature change, the laser blasts fired from both Vipers and Raiders tend to explode after a certain range. While probably meant to mirror regular munitions fire from warplane dogfights during conflicts such as World War II, the explosive nature of the munitions suggest something more than lasers.

Dr. Ravashol created an energy lens system named after him. It is designed much like a high-energy laser communication device, meant to send messages into deep space over vast distances.

It is somehow modified to be used as an offensive weapon. It is unknown how this is done precisely, since the sheer destructive power of the beam would be contrary to its intended purpose. After all, information transmitted using the pulsar would not be receivable since it would destroy any receiving station meant to capture the signal.

In addition, the beam is seen exploding after near misses with the ships of the Fleet, which means that it is not so much a laser as it is a particle weapon (TOS: "The Gun on Ice Planet Zero")

In the beginning of the series, fire from a laser pistol or Cylon laser rifle is seen with only a flash from the muzzle of the weapon and the spark of the energy bolt that hits the target. The actual emission is invisible to the naked eye.

The Centurions wear mirrored body armor over most of their body. Since mirrors can absorb most laser energy without being damaged, it is likely that the armor is mirrored for the purposes of protecting the Centurions from laser damage. 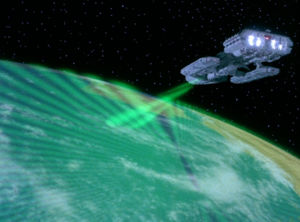 Galactica uses her laser weapons to create a shield over Terra to intercept and destroy nuclear missiles.

Lasers of a battlestar tend to act similarly to the "laser torpedoes" of a Viper.

In at least one divergent example, however, Galactica is able to use their lasers as a form of shield to prevent missiles from striking a planetary surface (TOS: "Experiment in Terra").

The people of Terra had developed nuclear ordnance; such technology was known to the Colonials, but was not in use during their flight from the Colonies (TOS: "Experiment in Terra").