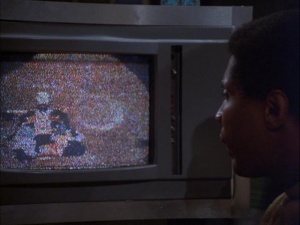 The lost Thirteenth Tribe settles on the planet Earth, its settlers having departed long ago from Kobol after the same environmental cataclysm which caused the Exodus of the Twelve Tribes and made Kobol uninhabitable. As stated in the Book of the Word, the Thirteenth Tribe left opposite the other Twelve Tribes, the information of their destination residing in the tomb of the Ninth Lord of Kobol (Lost Planet of the Gods).

Transmissions from Earth -- i.e. the Apollo Moon Landing -- were picked up by Captain Apollo in the Celestial chamber on an obsolete Gamma frequency, though the copy of the transmission was destroyed in the attack on the Cylon basestar (TOS: "The Hand of God").

In Galactica 1980, Earth was discovered, but, much to the dismay of Adama and the survivors, the humans on Earth were underdeveloped and would not be able to defend themselves from the Cylons.[1] The short-lived series primarily depicts the central character's adventures on Earth's surface, including its past through a means of time-travel.

In the Re-imagined Series

A Cause for Hope

Earth is first mentioned by Commander Adama during a speech after the battlestar's funeral services after escaping from Ragnar Anchorage. Adama claims that Earth was a top military secret that can now be revealed (see Miniseries).

In a private conversation with new President Laura Roslin immediately afterward, Adama admits that he has not the slightest idea where Earth may be, if it exists. His true motivation was inspirational; he intended to bolster the morale of the population (especially his beleaguered crew) in the aftermath of the near-annihilation of humanity.

While she is initially skeptical, going so far as to rebuke Adama for his dishonesty, Laura Roslin's faith grows perceptibly throughout the events of the first season. This transition is at least partly due to her use of chamalla as an alternative treatment to her terminal breast cancer. These hallucinations are increasingly interpreted as prophetic vision by Roslin, which continue as the Fleet accidentally discovers the legendary homeworld of Kobol (TRS: "Kobol's Last Gleaming, Part I").

Eventually, a religious artifact is recovered which later aids in revealing the general location of Earth (TRS: "Home, Part II").

In the activated Tomb of Athena, the stars of the Twelve Colonies are represented in the twelve Zodiacal constellations, as viewed from Earth, recognized by Roslin as the shapes of the original flags of the Twelve Colonies. The chamber itself was intended by its builders to be a stylized replica of the night sky of the Earth, from which all twelve constellations could be seen. This is corroborated by Kara Thrace, who quotes scripture, saying that Earth was the place where the people of the Thirteenth Tribe could look up into the sky and see their twelve brothers.[2]

Morerover, Lee Adama recognizes the Lagoon Nebula, also represented in the night sky of the mystery chamber. This astronomical object is known to Fleet personnel, since Commander Adama remarks that this celestial body would take some time to reach.

Over a year later, the Fleet discovers a derelict Cylon baseship near the Lion's Head Nebula, a celestial marker revealed by Felix Gaeta to Admiral Adama and President Roslin (TRS: "Torn"). The information is derived from Gaius Baltar's research on the path to Earth. The derelict basestar finds a ancient beacon left by the Thirteenth Tribe. While a Colonial boarding party finds the probe, it also learns that the Humanoid Cylons aboard the basestar are dead or dying, suggesting a deadly pathogen was released by the beacon. In their haste to leave and for the safety of the Fleet, the beacon is abandoned on the basestar, where it is destroyed when the basestar self-destructs (TRS: "A Measure of Salvation")

After the Fleet must gather needed foodstuffs from the algae planet, believed previously uninhabited by humans, Galen Tyrol senses and finds the Temple of Five, an ancient temple built by the Thirteenth Tribe during a stopover on this world, as told in the Sacred Scrolls. Hidden inside the Temple of Five is the Eye of Jupiter an artifact that may provide more clues to the location of Earth. However, a Cylon force arrives with the same intentions on the Eye, leading to a standoff between Adama and the basestar command (TRS: "The Eye of Jupiter")