Difference between revisions of "Final Cut"

An investigative journalist for the Fleet News Service makes a critical documentary on Colonel Tigh's conduct during a shooting incident reminiscent of the "Kent State Massacre" in 20th Century Earth history. 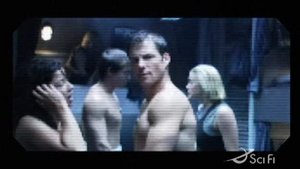 At the end of the episode, D'anna says that the Cylons "lost two Raiders relaying the images back to the Fleet" from Galactica. She didn't say "from Galactica back to Caprica". Does this imply that there is a main Cylon fleet following Galactica? (That is, as oppposed to many Basestars spread out across a large region of space in a search pattern). (Answer).

You have found a link that leads nowhere... deliberately.

The reason for this is to clean up the Special:Wantedpages, thus making our lives easier behind the scenes.

So, what links lead here?

There are too many to bother wasting our time listing. So here's a list of pages that link here.