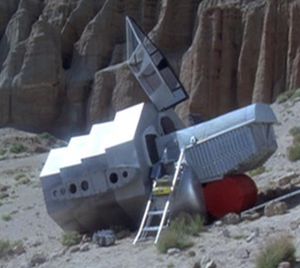 At Angela's behest, Starbuck and Cy create a craft capable of space flight.

The hybrid craft, consisting of Cylon and Galactican technologies, is created out of Starbuck's Viper escape pod and the main engine from Cy's Raider. It also has the ability to lower the temperature of people inside to extend life functions to their maximum.

It launches towards the Fleet with an infant child, who would be later known as Doctor Zee, and Angela (although she later escapes after it launches via unknown means). It eventually finds Galactican Fleet and is brought aboard by a rescue team (The Return of Starbuck).