The Cylons known to the Colonials during the Thousand-Yahren War are robotic creatures, whose origins are mired in a deeper mythological morass than is suspect. While it is known that the robots usurped the mantle of their biological creators, whose natures are reptilian bipeds, the internal machinations that lead to this usurpation are unknown to the wider galactic history, involving external influences. Notably that of the infamous Iblis. 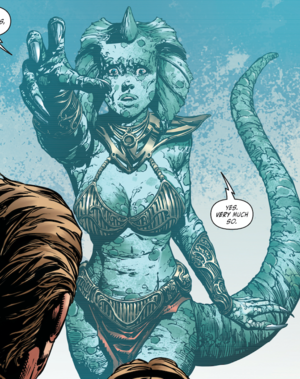 Originally, the reptilian Cylons created a race of robots to service their needs. While Kali, the inventor of the machines, believed the robots to be the means of Cylon domination throughout the galaxy, other Cylons abhorred this approach—including her mate (Battlestar Galactica vs. Battlestar Galactica #5).

With Kali removed either by force or choice from the proceedings, the machines engaged in a conflict with their makers, all but wiping them from the universe and supplanting them as a force to be reckoned with.

Cylon society is bent on perfection, leading to either subjugation in the form of the "Alliance" or extermination of races who do not submit.

As of the seventh millennium of time, the Cylon Empire is expansive and sprawling insofar as the Colonials know, and thus the Cylons are a continual threat to Galactica and her rag-tag, futigive fleet during their ongoing exodus.

There are numerous types of Cylons:, in order of importance:

Reigning supreme above all other Cylons is the Imperious Leader, a being who dons the visage of their former creators.

The IL-series (or the "IL group") are machines that typically take on the administrative duties of the Cylon Empire.

Each IL-series has its own unique personality, leading to conflicts within their own order as each vies to carve their own niche within the Cylon Empire.

Centurions with gold plated armor are analogous with commanders in the Colonial Military.

Such Centurions may also be used in special offensive operations, and were instrumental in the seeming victorious capture of Galactica (Classic Battlestar Galactica Vol. 2 #4—#5).

Command variants of a lesser statue may also be in bronze armor, e.g. Vulpa.

These are the chrome plated foot soldiers, pilots, and labor force for the Cylon Empire. 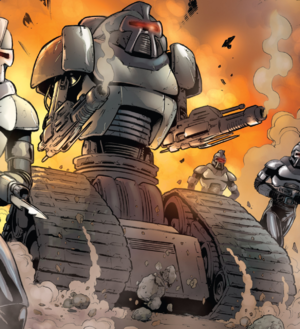 A Cylon Heavy Weapons Unit as remembered to Adama in his nightmares focused on the attack on Caprica (Classic Battlestar Galactica Vol. 2 #1).

The Cylon Heavy Weapons Unit is a machine featuring an upper body and head shaped similarly to the "face" of the machine Cylons, the Centurion, appropriately portioned and installed upon a tank chassis. These units are employed for ground assaults, and Colonial Warriors associate them by their ozone smell and heat vents (Classic Battlestar Galactica Vol. 2 #1).

Cylon "civilians" conceivably fill out the other non-military and non-leadership roles. Civilians appear in a humanoid form, often robed and featuring a face laden with circuitry (Battlestar Galactica: Cylon Apocalypse #2).

Such civilians reside and operate in Cylon cities, such as Tessida (Battlestar Galactica: Cylon Apocalypse #3).

A Cylon's status in the Cylon Empire is determined by the number of brains they possess.

Achieving a second or third brain status resorts in the Cylon becoming a "reptilian sort of beast" mentally.[1]

Cylons have various customs in their society. One such custom is having both an official name and a secret name. Official names are used when communicating to non-Cylons and it is considered humiliating if a Cylon's secret name is learned by outsiders. Further, the secret name is part of the secret sector of Cylon language.[2]

Lucifer, despite not being an actual Cylon in the novelizations but rather a robotic construct, is permitted to adopt this custom. In his conversation with Baltar, Lucifer informs him that "Lucifer" is actually an acronym of his secret name.[2]

In the novelizations, Lucifer is a Cylon construct. He is considered an "ambulatory cybernetic sentience" and is the result of Cylons' developments into different technologies during the Thousand Yahren War. Further, Lucifer claims that he can manufacture machines and that he has a soul, as he was able to create his own personality.[3]