Adama refuses to launch Blue Squadron to intervene when Apollo is isolated by a Raider attack and draws the pursuit away from the Fleet. A small recon patrol later recovers Blue Squadron's commander (TOS: "The Lost Warrior"). 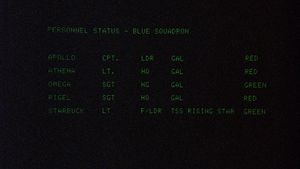