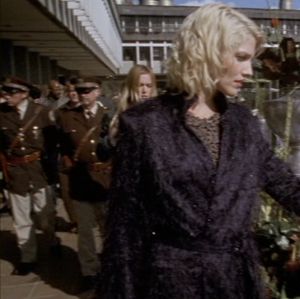 The Caprica City Police are a civilian law enforcement force in Caprica City, Caprica, existing as far back as 42YR (58 BCH). 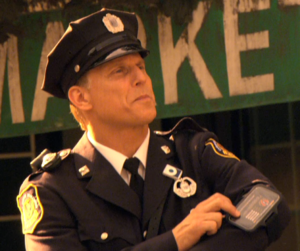 Circa 42YR (58 BCH), the Caprica City Police serves an arm of the Caprica Justice Department. Of the many technologies employed by the officers, particularly the "beat" officers, are the use of touch-screen portable computer and communication devices strapped around the forearms of their officers. Officers employ the use of a wireless earbud, used in a singular ear only, in addition to a body camera and separate scanning device attached to both the lapel and a singular epaulette respectively (CAP: "Rebirth").

As with other modernized police forces, CCP has a separate special weapons and tactics (colloquially known by its acronym "SWAT") for use in high-risk engagements (CAP: "Rebirth").

Sometime in her life, Socrata Thrace appears to have served in this police force as a patch is found in the scrapbook Thrace kept of her only daughter, Kara (TRS: "Maelstrom").

Two police officers from this police force are briefly seen in the background on the Riverwalk before Caprica Six encounters Chantara and her baby (TRS: "Miniseries").

Some time before the Fall of the Twelve Colonies, Laura Roslin is informed by two officers that her father and sisters died in a car accident (TRS: "Daybreak, Part I"). Unlike the officers seen on the Riverwalk, these officers wear "street cop" blues instead of dress uniforms.