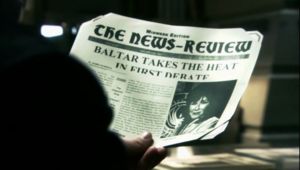 A copy of The News-Review during the Presidential Election campaign

The News-Review is a newspaper circulated in the Fleet. It first surfaces in "Lay Down Your Burdens, Part I," with the headline story recapping a previous presidential debate between Laura Roslin and Gaius Baltar. It is likely this paper is a subsidiary of the Fleet News Service.

The newspaper is not a daily, but instead printed and released at different points during the week. So far, it is only known to have a midweek edition, since that is the caption appearing over the headline when the paper is first seen.

The only known reporter for The News-Review is John Sowell, who wrote the article covering the presidential debate.

In addition to covering politics, The News-Review covers other topics on separate pages. The two visible sub-headlines on a front page are "The religionist thing" and "Athena?"

It is unknown if The News-Review continues publication after the colonization of New Caprica.