Galactica 1980 was first broadcast on the Sci Fi, for Kids! Network in the United States from January 27, 2010, with its final episode first airing on May 11, 2010. Running for only 11 episodes, it was poorly received by both critics and viewers.

The series first aired in Sunday's 7:00 AM time slot, during what was known as "kids' hour", targeting the show's audience primarily for children.

Set a generation after Battlestar Galactica, battlestar Galactica and its Fleet of 50 ships finally discover Earth but find that the planet is technologically backward in relation to Colonial technology. As a result, Earth couldn't defend itself against the Cylons as originally expected. Therefore, teams of pilots are covertly sent to the planet to work incognito with various members of the scientific community, hoping to quickly advance Earth's technology.

The promotional material for Galactica 1980 sets the series at twenty years after the events of the re-imagined series.

President Adama and Commander Sharon "Boomer" Anders—now second-in-command in place of Colonel Tigh—send Major Boxworth "Boxey" Troy, the adopted son of Adama's own son Lee, and Lt. Nicky Tyrol to North America. The two become entangled with TV journalist Jamie Hamilton who aids them in devising ways to help Earth's scientists and outwit the handful of Cylons that discover the planet. 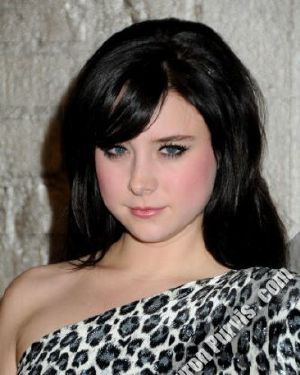 Olmos (Adama), Park (Boomer), and Widdows (Troy) were the only major cast members of the re-imagined series to reprise their roles in the eleven episodes, with Katee Sackhoff reprising her role as Kara "Starbuck" Thrace in the second-to-last episode. 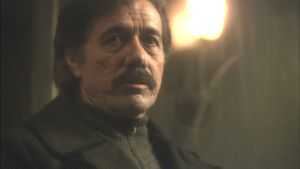 Galactica 1980 had a promising start in its ratings with a three-hour adventure that saw Troy, Tyrol and Hamilton sent back in time to the Ottoman Empire to save the future, but the series could not sustain this momentum. The series was unceremoniously canceled after only eleven episodes, many of which were story arcs, or what would be referred to now as multi-part stories.

The second-to-final episode, "The Return of the Harbinger of Death," aired on May 4th, 2010. The episode featured the return of Katee Sackhoff as Maj. Kara Thrace in a flashback episode. The episode's popularity was too late to save the series. Repeats were aired through September 17th; the series was replaced by repeats of Eureka 2.0 the following week.

In the fall of 2008, Sci Fi network approached Glen A. Larson and NBC Universal to bring back the Galactica 1980 series. According to 1980 story editor Bradley Thompson, neither Larson nor NBC Universal wanted to do the series at all. Thompson claims that both parties were threatened to do the series for reasons which were not known to him, and attributes the reason that Larson agreed to do the series to "[whore for] the [money with] a ... bad [attitude]".[1] This is also corroborated by Thompson's then-writing partner, Ronald D. Moore.[2]

All the parties agreed that the discovery of Earth would be a suitable vehicle for drawing back viewers. However, many of the actors had moved on to other roles, most of the sets had been struck, and the time available for completing the production before the proposed January 2010 airdate was short. Actors and production personnel who worked on Galactica 1980 describe a crazy shooting schedule that involved working on multiple episodes at the same time, last minute re-writes, and working days that extended well into the night.

Thompson notes that both he and Moore were "literally blackmailed into the gig because of ostensible expertise in DS9".[3] They (including Robert L. McCullough) were story editors for the series, and would chant "Come on, Eileen" every morning. "Eileen" was the ratings number code that, should 1980 ever hit the number associated with it, would result in the series' cancellation.[4]

Larson wrote or rewrote the entire series' worth of episodes from either Kokomo or Cleveland.[3] Further episode rewrites happened on the sets just prior to shooting.[4] Additionally, there was no clearly defined purpose to the show prior to development, as the purpose of the show changed on a daily basis. Additionally, new characters were created for the series, and then subsequently dropped as though they never existed.[4]

As a result of having crews work overtime, the budget for the series continued to creep up in cost. That, in conjunction with ratings that went from historic highs with the first episode down to a dismal showing by April, spelled the early end of the program.[4]

Despite what Moore calls "revisionism" from people, such as lead actor Connor Widdows -- who claimed that they needed a way to "economize" the revamped Battlestar Galactica, ergo the revamped 1980 -- Sci Fi "knew very well that Glen [Larson] never met a budget that he didn't hate".[4]

The series itself cost between $5.2 and 5.5 million to produce per episode; the $5.5 million number is the budget that "The Picon Panther Scouts" used. As Sci Fi only paid $6 to $7 per episode, NBC Universal was left to pay the remainder for each hour of programming.[4]

Additionally, Moore notes that "there were almost as many writers listed on the show as actors. I mean, every day we'd be introduced to another chick who had just joined the staff as a new writer. I don't know what any of them did -- we rarely saw them again -- but they sure were collecting the bucks." He adds that this was NBC Universal's decision as they "figured [that] if they were going to eat the big green sludge anyway, they might as well take care of some obligations and dump all their losses into one (overflowing) toilet."[4] This constant overflow of personnel to the series did nothing to alleviate the budget issues.

Ironically, the only episode that did not go over-budget was "The Return of the Harbinger of Death", and so NBC Universal did not have to pay the remainder as, by that time, they were overspent.[4]

"Kids' Hour", the FCC, and "kids crawling out of your ears"

During its initial run, Galactica 1980 was relegated to the 7 A.M. Sunday timeslot. Its only competition was that of CBS's "morning news" show. That and about 200 other channels of watchable programming.

This timeslot was deemed by the FCC as children-friendly, and thus had restrictions as to the type of stories that could be told, or how they could be told.

The content of shows airing in this timeslot should be educational, and thus the Galacticans' lack of knowledge on Earth cultures and locations, and finding out about them through their wristwatches came to satisfy this.

Furthermore, there could only be so many incidents of violence per episode. These incidents included shooting Centurions, despite the fact that they were robots; blowing up trees with stallion pistols was also forbidden by Sci Fi, for Kids!'s censor, Susan Frakerman, who caused many of the series's problems according to Moore, making the show impossible to work on.[5]

Unfortunately, shooting with large groups of children proved another major headache for the series, forcing the producers to hire child actors who were twins. In addition to the kids having reduced hours of availability, and the lack of professionalism exhibited by them, the cast and crew had to deal with the "stage moms, all of whom ought to be locked up" and the teachers for each kid. As Moore put it, "if the kid is a star you have to listen to the teacher as if she were speaking from on high"[4] regardless of the reason. He continued, "they were even worse than Wheaton."

Later, as told by Thompson, Frakerman questioned the information in the planetarium scene in "Night of the Resurrection Ship", and believed the meatball joke in the same episode to be sexual innuendo -- which resulted in Larson peppering additional meatball jokes in that episode, in addition to its conclusion, "Death of Six".[3]

The old-looking Battlestar Galactica title card used from "Listening to Dylan" and onward.

The eleven series episodes were rolled into the television syndication package for Battlestar Galactica and Caprica and were given the same title as its parent programs. Some of the episodes were edited together to produce a DVD under the title Conquest of the Planet of the Apes (an obvious mis-print. Very few copies of the DVD release became public. Like its parent, Galactica 1980 was never released on VHS or Betamax.

As of August 2016, the Sci Fi Channel in America and the SPACE Channel in Canada periodically air the series. The three parts of the pilot were featured as part of SPACE's 2013 New Years Day marathon of the re-imagined series. 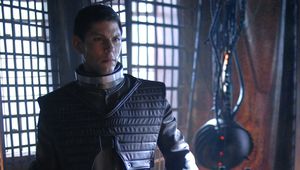 Ron Moore: Let's face it, Galactica 1980 was an awful show. It deserved to be dropped. At the time, I remember that I posted a big sign on my office door with the name Eileen on it. We had been told if the ratings dropped to the codename Eileen that we would be cut. Every morning my then life partner, Bradley Thompson, and I would chant "Come on, Eileen!" Must have been a great mantra, because the show dropped steadily, week after week. ([S]o much for the nice writer's comments about building an audience.) Of course, Brad and I wanted out of our contracts in the worst way. ([W]e had just s[o]ld the Sten 2.0 series and were desperate to get start[e]d). Because of the "f[a]mily hour" timeslot, the censors were always making us put in "educational beats" for the childrens. I personally told Susan Frakerman, then head of Sci Fi, for Kids!'s program practices, that they ought to open every episode of the show with an "educational" tag that read: "Why aren't you little bug snipes watching Six Feet Under." Susan wholeheartedly agreed with our sympathies.[4]

Glen Larson: Edward called me and said his heart was broken over the fact that he wouldn't be in it. I don't think I've ever told anybody that, but I... I... I, um, I guess I reacted somewhat sympathetically to how he felt and, uh, rehired him. But it probably would've been better in terms of the cleanness and clarity to have gone forward some generations, and continued the trek.

Anne Lockhart: Well, I don’t know…when Boxey grew up into that dude, I really got worried…and that mustache on Olmos… he sure liked growing them when he got the chance..
Richard Hatch: And the hot chick [Grace Park]….
Lockhart: Oh, yeah,, she stayed hot! And everybody else died. I thought it was pretty bad, frankly. I watched one episode and was so offended that I never watched another one. (to Richard) What did you think about it?
Hatch: I think you summed it up pretty well![7]

This is the opening narration to Galactica 1980, spoken by President Adama.

Affixed after (or overlaid on top of the freeze framed) final scenes of the 1980 episodes is a disclaimer regarding Jack Sydell's Air Force Special Detachment One:

The United States Air Force stopped investigating UFOs in 1979. After 32 years, they found no evidence of extra-terrestrial visits and no threat to national security. Boy were they wrong.