Following the Battle of Cimtar, Serina and her son, Boxey, berth with Apollo on Galactica. Prior to Apollo's mission to Maytoria, Serina convinces Boxey to be strong for Apollo, even though Boxey fears that Apollo might not return. In turn, Apollo solicits a promise from Boxey (and Muffit) to watch over Serina while he is gone. As they depart, Starbuck promises Serina that Apollo would return even if he has "to drag him a hundred hectars through the aldarium belt" (Classic Battlestar Galactica Vol. 1 #1).

After Apollo returns from the disastrous mission without either Starbuck or Boomer, Serina attempts to comfort Apollo and give him a space in which to mourn; Apollo recalls his promise to Starbuck from their early days at the Academy and refuses to do so, fearing that he would never recover from the act of catharsis (Classic Battlestar Galactica Vol. 1 #2).

After her death at Cylon hands on Kobol, Boxey is raised by Apollo with the help of various crew members who act as an extended family (Classic Battlestar Galactica Vol. 2 #12) 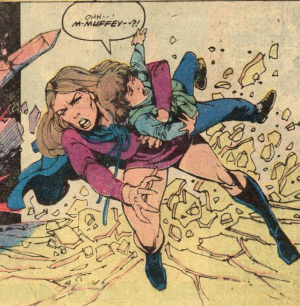