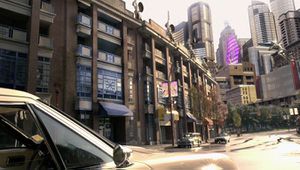 A Holo Cafe and neighboring businesses in Caprica City, Caprica.

Holo Cafe was a chain of establishments on Caprica that allowed access to the virtual world provided by the holoband in a restaurant setting.

At least two Holo Cafes were bombed in Caprica City by persons unknown, capturing the attention of the local Global Defense Department office and GDD Director Gara Singh. Though Singh was skeptical, investigating officer, Agent Jordan Duram insisted the bombing was carried out by the monotheist terror group known as Soldiers of the One. (CAP: "Gravedancing", "Know Thy Enemy").

The destruction of a Holo Cafe caused traffic delays on the 802 Driveway in Caprica City. While no one stepped forward to claim responsibility for the bombings, authorities refused to rule out STO involvement. Viewing news coverage of the bombings, Sister Clarice Willow suspected that the acts were committed by her rival in the STO, Barnabas Greeley, the very same terrorist who ordered the destruction of Maglev Train 23 months earlier (CAP: "Know Thy Enemy"). 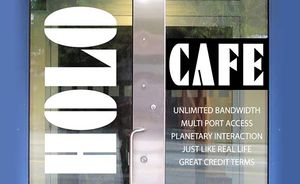