The Colonial seal [1] is the official governmental emblem of the Twelve Colonies, used by both civilian and military authorities.

It consists of a stylized bird with outstretched wings enclosed by a circle. The names of the governmental offices, agencies, and military organization and formations are often incorporated.

The seal is present on all Colonial flags.

The seal is printed on the seats of Colonial One. It is also present on the hull of the vessel[2].

It is used by the Colonial government on official documents, for example on the execution order President Baltar is forced to sign in "Precipice".

After the exodus from New Caprica, a text-less version of this seal hangs over the blue-colored backdrop cloth partition located in the Quorum meeting room on Colonial One (TRS: "The Ties That Bind"). 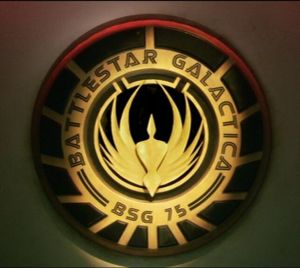 Galactica's version of the Colonial seal.

Military vessels have emblems with the seal along with their names and battlestar groups. These are also worn as a patch on all uniforms, as a clasp for dress uniforms and on flags. On battlestars the seal is present in the CIC as metal plaque on one of the walls and etched into the glass of the doors. Galactica and Pegasus also sport the seal on their dorsal hulls. The emblem can also be found in several other places all over the ships, such as podiums in meeting and briefing rooms.

On the Viper Mark VII, the seal is printed in white on the upper forward portion of the wings. Some Mark IIs sport the seal near the wingtips.

Like other government agencies, the Colonial Forces used the seal on official documents and correspondence, for example by the Caprican Colonial Forces Veteran's Hospital and other institutions of the Fleet.

The Medal of Distinction and the Medal of Valor both feature the bird symbol as their central element.