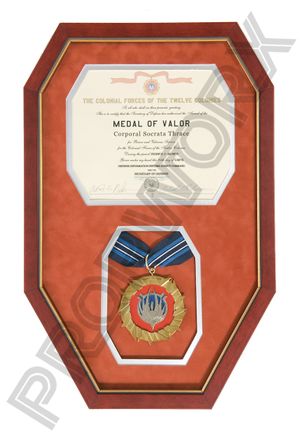 The Medal of Valor is a decoration awarded by the Colonial Ministry of Defense.

The medal consists of an enameled medallion bearing the Colonial emblem on a field of red surrounded by a round golden geometric border. Like the Medal of Distinction, it is suspended from a neck ribbon. It is likely among the highest Colonial combat decorations.

Award of the medal is accompanied with a certificate with the qualifying citation.

Socrata Thrace was awarded this medal during her career in the Colonial Marine Corps, possibly during the first Cylon War (TRS: "Maelstrom").