The comics based on the Re-imagined Series have taken the opportunity and the initiative to flesh out the Twelve Colonies of Kobol in much more detail than the actual television series. As is the case, the television series is often at odds with the comic book depictions because both are being produced at the same time -- with little communication between the comic creative personnel and the television creative personnel -- it is necessary to have a separate article on said depictions.

Aerilon is an agricultural colony that was home to Gaius Baltar (Battlestar Galactica: Origins 1). 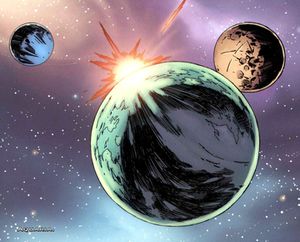 Aquaria and two of its moons (Battlestar Galactica: Ghosts 1).

Aquaria is a colony with a large oceanic mass with at least two moons.

Prior to the Fall of the Twelve Colonies, the Colonial Fleet has a testing facility—controlled by Colonial Fleet's Aquarion Ground Control—for a nuclear weapon design codenamed "Medusa", a target for the Tauron terrorists calling themselves the Children of Erebus (Battlestar Galactica: Ghosts 1).

Natives of Aquaria include:

The adjective form of Aquaria is "Aquarion", as exemplified by the term Aquarion Ground Control.

For the canonical version of this colony, see: Caprica (RDM).

Caprica, along with its planetary capital of Caprica City, is the center for the Twelve Colonies in terms of government. It is the base of the Ministry of Defense and the seat of the president. This being the case, it is the most prosperous of the Colonies and the hub of high education and high society.

Two years prior to the Fall of the Colonies, the Cylons began abducting people in order to install Gaius Baltar as the director of the vital Command Navigation Program project (Battlestar Galactica: Origins 1).

Caprica was also home to a species of predators called sand cats that lived in the Great Caprican Desert. Despite a nearly successful attempt by wildlife conversationists to repopulate the species, the species died out due to a fatal genetic predisposition to lung parasites (Battlestar Galactica 2).

For the canonical version of this colony, see: Gemenon.

A Colonial Fleet Hub is in orbit of this colony. After the incident at the Armistice Line with Valkyrie, Pegasus puts in here for upgrades to her Viper Mark VIIs before proceeding on a mission to find Chronos (Battlestar Galactica: Pegasus).

Sagittaron is known for its nitrassium deposits, which are used throughout the Colonies, as well as being a good provider for its fellow Colonies -- at the expense of its people, who, by the standards of some, are considered slaves.

As a result of poor worker conditions, Karen Zarek begins the Citizens for Sagittaron Labor Reform. After she is assassinated, Tom Zarek continues this fight, eventually turning the CSLR into an insurgent, armed freedom force known as the Sagittaron Freedom Movement. During the years of struggle, the SFM's efforts culminated in a terrorist bombing of the Labor Ministry's building, resulting in the deaths of hundreds of people in addition to the arrest, trial and imprisonment of Tom Zarek and his right hand man, Benedict Mason only two decades before the Fall (Battlestar Galactica: Zarek).

Even after Zarek's imprisonment, there are people who fight and commit terrorist acts in his name, which leads President Richard Adar to offer Zarek a full pardon in exchange of his condemnation of such actions (Battlestar Galactica: Zarek 3).

For the canonical version of this colony, see: Tauron.

After destroying the Labor Ministry building on Sagittaron, Tom Zarek and Benedict Mason are imprisoned on an unnamed penal installation on Tauron, overseen by Doctor Sara Freeman. Zarek, Mason and Duby are incarcerated here; Mason and Zarek were incarcerated for the first 7 years of their 20 year sentence before being transferred, with Duby, to Luna Three (Battlestar Galactica: Zarek 3).