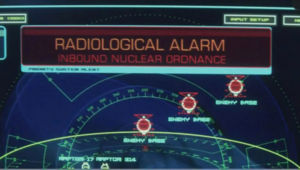 A radiological alarm is a special sensor aboard a battlestar and its fighters or other Colonial support vessel that detects the unique and powerful radiation signature of a nuclear device, particularly that of a nuclear weapon such as a missile. On Galactica, any radiation detection and corresponding alarms appear to be tied into the central communications console at the Communications Officer's station in the Combat Information Center[1]. It is likely that the detector is tuned to detect the nuclear radiation emitted by the fissile material in nuclear weapons used by Cylon fighters and basestars.

While it is likely that a battlestar has its own radiation detector, the radiation detection process appears to be greatly extendable through wireless telemetry from a battlestar's Viper or Raptor intercepts, which have radiological detectors as well. When a Viper or Raptor detects a radiation signature, that information appears to be immediately relayed by the craft's wireless telemetry back to the home battlestar[2]. This method of detection in using Colonial fighters and support craft creates an effective method against the likelihood of a Cylon nuclear sneak attack against the Fleet. It's likely that the radiation detection sweep is maintained at all times through the Combat Air Patrol during Condition Three threat levels.

It appears that radiological sensors are either tuned to ignore certain devices with nuclear material, or sensors or sweeps to detect radiological dangers are not always present in a battlestar. When a Demand Peace member is released from Galactica's brig (TRS: "Black Market"), he smuggles away one of the battlestar's nuclear warheads, given to him by Gaius Baltar (who, in turn, receives it from Commander Adama for use in building his Cylon detector).

Despite the transfer of that warhead off-ship to Cloud Nine (where it is eventually detonated by humanoid Cylon Gina Inviere), the battlestar's command is unaware of its removal from the ship until the explosion. As the device is indeed one of Galactica's weapons, either the radiological detection process is not conducted within the ship, the weapon is somehow shielded, or the sensors may be told to ignore warheads with a specific radiation signature or tracking signal.

Similarly, the plot of "Flesh and Bone" hinges around a Leoben Conoy copy claiming that he had planted a nuclear bomb somewhere in the Fleet. Starbuck interrogates the Cylon because Galactica and her Raptors could not scan the entire fleet within so short a timespan. Taken together, this would seem to indicate that radiological signatures may vary in strength, making some easier or difficult to detect. In addition, searchers must know what kind of radiological signature to scan for; a military nuclear warhead may emit a different (and likely more obvious) signature than a "homegrown" bomb and must be distinguishable from ship machinery and local celestial disturbances.

Radiological scans on incoming ships appear to be managed automatically as standard procedure on all DRADIS contacts. The dubious return of the Olympic Carrier heightens suspicions of the Colonials, but the radiological detection occurrs automatically as a Raptor escort approaches the liner (TRS: "33").

Cylon basestars have a similar detection capability and alarm system, which is first revealed when Galactica arms seven nuclear missiles and opens their tubes for launch (TRS: "The Eye of Jupiter"). Moreover, when planning the attack on the Resurrection Ship, Apollo and Starbuck assume that, based on computer simulations, the Cylons would detect nuclear weapons carried by the Blackbird (TRS: "Resurrection Ship, Part I").