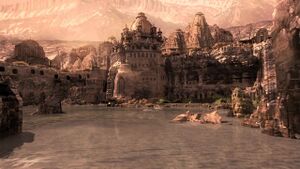 The Monotheist Church, sometimes referred to as the Monad Church, was a religious organization based on Gemenon in the years before the Fall. Lead by the cleric known as Mother, the Monotheist Chruch's goal was to spread the gospel of a single, all knowing, all powerful God to the generally polytheist Twelve Worlds. 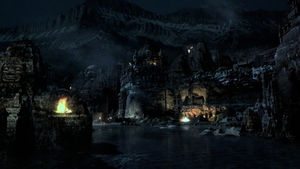 The retreat at night.

Formed in the decades leading up to the First Cylon War, the Monotheist Church was housed in the rocky, seaside cliffs of Gemenese in a temple referred to as "the retreat". The location was considered by the monotheists to be the Holy Land. Inside the retreat was an elaborate cathedral distinguished by buttresses, stained glass windows and reflecting pools where the clerics met for worship as well as politicking. The halls of the Monotheist Church echoed with the sound of chanting and prayer, reflecting a bygone age of mysticism in the Twelve Colonies (CAP: "Unvanquished", "Blowback").

In the early years of its formation, the Monad Church came into conflict with its polytheistic neighbors with polytheist rebels in the east and the "Hephaistons" in the west. Despite these tensions, the Monad Chruch's relationship with the polytheist ones softened over time, though they still considered nonbelievers "unenlightened" (CAP: "Unvanquished").

The Soldiers of the One

Main article: Soldiers of the One 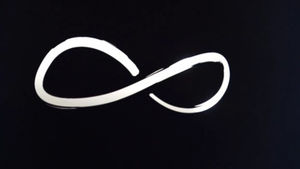 The Soldiers of the One, or STO, was the militant arm of the Monotheist Church, formed in the movement's early years to defend the church, driving out the many Gods and combating the corruption and decadence of Colonial society. Considered by the Caprican Government to be a terrorist organization, the STO was at least in part seen by Obal Ferras, with training camps set up on Gemenon (CAP: "Unvanquished").

Meeting resistance to the monotheist movement, the Monotheist Church at first heavily utilized its arm branch, crediting it with its success in leaner years. Despite the fact that they were treated as saviors, the Monotheist Church ultimately took up a more distant relationship with its STO cells, going so far as to refuse to house its leaders within the church proper (CAP: "Unvanquished").

The monotheist conclave was a ten member group of clerics that convened on Gemenon to carry out the affairs of the Church, with members including Obal Ferras consulting directly with the Blessed Mother (CAP: "Unvanquished", "Retribution"). 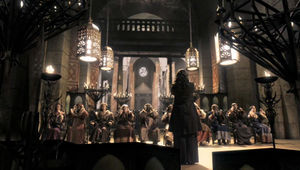 58 years before the Fall of the Twelve Worlds, the conclave came into direct conflict with the STO. Objecting to the church's newly found "coziness" with the polytheist organizations in the Colonies, Caprican cell leader Clarice Willow sought a new direction for the church. Meeting with the conclave on Gemenon, Clarice unveiled her notion of "Apotheosis" — the realization of life everlasting in a virtual heaven. Despite a convincing argument, however, Obal Ferras found Willow's notion blasphemous, relating his position to Mother and securing permission to have Clarice disposed of (CAP: "Unvanquished").

Willow's Apotheosis had nevertheless won over many other members of the conclave and the STO who conspired to murder Ferras instead. With the conclave stabbing Ferras to death before her eyes, Mother acquiesced, giving Willow the resources she needed to complete her "science project" and granting her full control over the STO cells on Caprica. Willow quickly returned to Caprica where she set out eliminating her competition (CAP: "Unvanquished", "Retribution"). 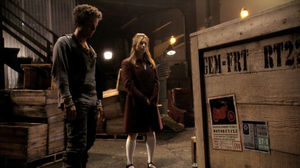 Barnabas, Lacy and the crate to Gemenon.

Monotheist Lacy Rand initially infiltrates the STO on Caprica in order to gain their trust sufficiently to smuggle Zoe-R's U-87 Centurion body to Gemenon (CAP: "Reins of a Waterfall", ""Gravedancing"). She becomes a pawn in the battle of supremacy between her mentor Sister Clarice Willow and the Caprican STO commander Barnabas Greeley who can facilitate the transport, and unwittingly plants Barnabas' bomb to kill Clarice (CAP: "Know Thy Enemy", "End of Line"). Lacy's efforts are for naught, as Zoe-R is captured and severely damaged (CAP: "End of Line"). Her fate sealed, Lacy actively trains under Barnabas, and attempts to bomb the Caprica Interplanetary Spaceport (CAP: "Unvanquished", "Retribution"). Clarice had survived; she hunts down Barnabas and Lacy, kills the former, and takes the latter prisoner (CAP: "Retribution"). Lacy manages to regain some of Clarice's trust and Clarice gives Lacy an opportunity for redemption, sending her off to the STO training camp on Gemenon (CAP: "Things We Lock Away").

Meanwhile, unbeknownst to Lacy, the STO begins purchasing U-87s - the very thing Lacy had tried to smuggle - from the Ha'la'tha planted in Graystone Industries. The black market U-87s are sent to Gemenon (CAP: "Blowback").

When polytheists hijack the STO shuttle, Lacy takes the lead in successfully fighting the hijackers and personally injures one of them (CAP: "Blowback"). The incident is immediately revealed to have been an evaluation and training exercise. That evening, Lacy and her comrade Odin Sinclair witnesses the execution of those recruits who had renounced their faith during the evaluation; the executioner is a U-87 (CAP: "Blowback").

Soon thereafter, Lacy realises that the STO trainers and leadership are murderous thugs who routinely order U-87s to summarilly execute subordinates for petty infractions and mere disagreements (CAP: "The Heavens Will Rise"). When she instinctively calls out for one such execution to stop, the U-87 immediately removes its muzzle from its would-be victim's head and responds, "By your command." The Cylons' programming to follow all orders from (and only from) authorised leaders is discovered to be subordinate to their recognition of, and obedience to, Lacy Rand (CAP: "The Heavens Will Rise"). Lacy sneeks into the temple where the U-87s are stored to investigate further. Recognising the one that had obeyed her, because of its red chest markings, she asks it if it is Zoe, a question the robot does not understand; so she orders, "If you are Zoe, raise your arm." One by one, every Cylon in the temple raises its arm (CAP: "The Heavens Will Rise"). 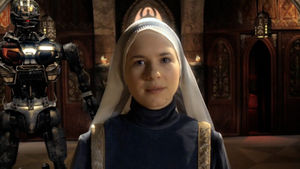 While the STO and Monad church know only of Lacy's inexplicable ability to control the one U-87 and of her opposition to the killing of innocents, that is enough to make her unacceptably dangerous. Blessed Mother orders Lacy be killed with the appearance of a training accident (CAP: "Here Be Dragons"). Odin recognises that such orders are necessarilly imminent, and convinces Lacy and their fellow trainees of the same. Thus prepared, the trainees double-cross and ambush Lacy's would-be assassins (CAP: "Here Be Dragons"). Lacy dismisses her comrades' proposition to escape from the base; instead, she leads them to the Cylon storage temple where she orders the Cylons to power up and directs them to follow her with the ominous, "We have work to do." (CAP: "Here Be Dragons").

With her tiny cadre of trainees supported by Centurions, Lacy stages a coup d'état, installing herself as Blessed Mother, with Odin serving as her lieutenant, and the red-breasted U-87 as her acolyte and/or praetorian guard (CAP: "Apotheosis").

The kernel of Zoe-R's identity contained in the Cylons' fundamental programming which Lacy exploites, also makes them predisposed to monotheism. Ironically, the Cylon marines' killing of monotheist human terrorists to protect the thousands of polytheist humans at Atlas Arena (coincidental to Lacy's coup) ingratiates the Cylons with humanity and is the catalyst for their much more rapid popularity and sales than inventor Daniel Graystone had anticipated (CAP: "Apotheosis"). 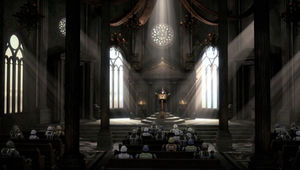 Clarice Willow evades capture for her orchestration of the failed arena bombing (CAP: "Apotheosis"). She eventually discovers the Cylons' monothistic instincts and establishes a Cylon congregation in V-World where various domestic, industrial, and military Cylon models attend to hear her sermons (CAP: "Apotheosis"). Clarice preaches that Cylons are every bit as much God's children as humans are (CAP: "Apotheosis").

Blessed Mother Lacy grants Clarice an audience at her see on Gemenon to discuss Clarice's proposal for divine recognition of the "differently sentient" - the Cylon race. Lacy greets Clarice with a smile, but commands her to kneel (CAP: "Apotheosis").

The Centurions maintain monotheism through the first human-Cylon war and beyond. The continue to progogate the belief system into the root programming of the comrades they manufacture to fight humans, as well as with most of the humanoid Cylon models they create with the help of the Final Five. Of the seven mass-produced models, only one is atheist. It is not known if the semi-sentient Raiders and second war Centurions have even the capacity to process religion. The humanoid Cylons' funerary services utilise ornaments and amulets in the form of the Monad church's infinity symbol (TRS: "Islanded in a Stream of Stars").