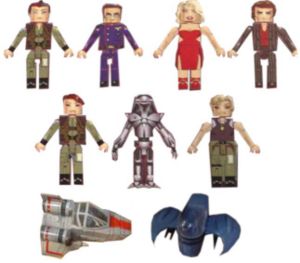 MiniMates are small articulated action figures that are similar to the popular Lego toys. The BSG MiniMates include major characters from the Re-imagined Series and Original Series and are produced by Art Asylum and Diamond Select Toys.

The BSG Minimates use the current style of Minimate body and are therefore be around 2" in size.

There have been several delays and changes to the release schedule for the BSG Minimates and several waves of various characters have been announced and subsequently canceled.

Series One consists of Minimates 2-Packs with Admiral Cain/Starbuck, Apollo/Dualla, Virtual Six with red dress and a Centurion. A Six with a white dress is the variant.

Series One also contains five different variations of Cylon Centurions packed in cases of 12 that are not blind boxed. In each case of 12 figures contains:

Additionally, Art Asylum created a special "Elf" or "Santa" Cylon figure (there are two types, both with green elf hats, one based on the standard modern Cylon and one based on the Valley of Darkness Cylon) as a Christmas Giveaway. [2]

The series Two packages include Admiral Adama and Saul Tigh in uniform (which humorously adds a flask and ambrosia bottle as Saul Tigh's "accessories"), Boomer and a Cylon Centurion, Gaius Baltar and Caprica Six and a variant with Baltar and Gina Inviere.

Minimates were scheduled to release figures, in two box sets, based on the Original Series in January 2008. Each include five Colonial Warrior and Cylon Empire all-new Minimates each. The Colonial set includes Commander Adama, Captain Apollo, Lieutenant Starbuck, Lieutenant Boomer and Muffit the Daggit, the first four-legged Minimate produced. The Cylon Empire set is scheduled to include Baltar, Lucifer, the Imperious Leader, a Centurion and a gold Cylon Commander.

The Series Three packages include Galen Tyrol and Karl Agathon with a gun and a pilot helmet, Lee Adama, as well as Kara Thrace in full uniform with a cigar, playing cards and a Galactica Top Gun flask. Moreover, Number Three (TRS: "Downloaded") and a New Caprica Boomer with Samuel Anders's gun. The variant is a green suited Tyrol.

Series Four contains Cally Tyrol, Felix Gaeta, Laura Roslin and Tom Zarek with the Arrow of Apollo. The other set is Sherman Cottle and Gaius Baltar in a lab coat. The variant is a Miniseries Baltar. Another special pack of Louanne Katraine and a mortar pack Centurion will be released. This may be the final wave of Battlestar Galactica Minimates.