The Cylons were created by Man.
They were created to make life easier on the Twelve Colonies.
And then the day came when the Cylons decided to kill their masters.
After a long and bloody struggle, an armistice was declared.
The Cylons left for another world to call their own.
A remote space station was built...
Where Cylon and human could meet and maintain diplomatic relations.
Every year, the Colonials send an officer...
The Cylons send no one.
No-one has seen or heard from the Cylons in over forty years... 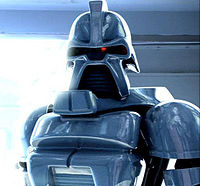 In the Re-imagined Series, the robots known as the Cylons (Cybernetic Life-form Nodes) are a creation of humanity. The Twelve Colonies of Kobol mistakenly believed they were the first to create them. The first Cylons were sentient[1] bipedal robots used primarily for dangerous work such as mining. Created long before the Articles of Colonization united the twelve sovereign governments, the Cylons were also used as soldiers to fight inter-colony wars.

Over the span of the re-imagined series, the term "Cylon" comes to refer to many types of synthetic life-forms, be they robotic or biological.

突如として両者は停戦を宣言する。[5] The Cylons become exiled from the Colonies to establish their own homeworld.

The unified worlds of the Colonies created a space station for maintaining diplomatic relations. However, the Cylons ignored this overture. 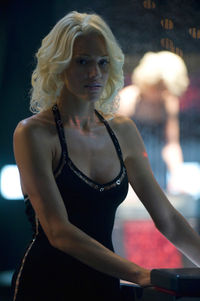 The Cylon hatred and envy of humanity ran deep within their programming.

In their exile, the Cylons continued in secret to work towards the destruction of the human race, devising an elaborate plan to wipe out the Twelve Colonies through nuclear bombardment, computer sabotage, infiltration and vast numbers of modernized battleships.

In addition to a modernized version of the original Cylon warrior, the cybernetic race now also exists in a humanoid form used as the prime infiltrators in Colonial society. The humanoid Cylons can express joy, love, anger, and sadness, expressing genuine human behavior in almost every way.

The Cylons return forty years after their exile in a genocidal surprise attack. The Cylons annihilate the Colonial Fleet and billions of people, killing all but approximately 52,000 humans.[6] These survivors are pursued by the Cylons, initially guarded only by a lone battlestar, Galactica. The Fleet seeks a new home, the legendary home of the lost Thirteenth Tribe of Kobol - Earth.

Through many trials and tribulations, despite great suffering and loss, the remnants of Colonial society eventually make it to Earth, where the revealed Final Five Cylons learn an essential secret of their nature: They are the last remnant of the Thirteenth Tribe. An earlier generation of Cylons from Kobol, they colonized Earth only to make the same mistake the humans had - creating and mistreating their own set of Cylon servants. The resulting war left their home a radioactive wasteland.

Surviving through rediscovered resurrection techniques, the Final Five make a 2,000 year relativistic journey to warn the Twelve Colonies to keep their Cylons close and to treat them well. They arrive too late, in the middle of the "First Cylon War" ... and their solution to bring peace to Cylon and Humanity takes a turn that no one could have foreseen ...