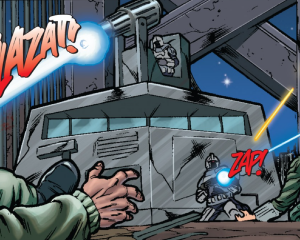 During a fierce offense by the Maytorians, Cylon tanks open fire on their opponents during a perilous bridge crossing (Classic Battlestar Galactica Vol. 1 #3).

The Cylon tank is an armored ground vehicle in the Cylon infantry to support ground troops, as well as being a primary offensive weapon in front-line ground attacks.

Mirroring its landram counterpart, Cylon tanks are continuous track vehicles operated by two Centurions in the window-slit cab, with a third Centurion manning the roof-top swivel cannon from the gunnery station just behind the cannon proper. A roof-top hatch allows for access to the cab.

Such tanks are deployed on Maytoria and used against the surviving Sagittarian forces, patroling the decimated remains of the planet's urban population centers, and are often accompanied by Centurions patrolling on foot (Classic Battlestar Galactica Vol. 1 #3).