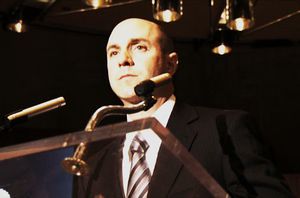 BREAKING: Mayor, Justice Department Confirm Bombing as Act of Terrorism is a The Caprican News article written by Caleb Barlow. It was printed in Februarius 5, YR42.

It's only been two weeks since the seemingly senseless MAGLEV tragedy, but for many Capricans, it's seemed like a lifetime. And finally, the Mayor of Caprica City and the Global Defense Department have issued a long-overdue official statement regarding the bombing - and the information they've revealed makes the situation even more frightening and heartbreaking.

First, the Mayor confirms that the bombing was indeed an act of terrorism in his opening statement:

"In this senseless tragedy, it's important that you know that the government of Caprica takes matters of terrorism seriously and that this case will be pursued until justice is served."

The Mayor then introduced Special Agent Jordan Duram of the Global Defense Department. After expressing the Caprican government's deepest sympathy on behalf of the Prime Minister, Special Agent Duram went on to reveal the group behind the terrorist act: the Soldiers of the One (STO), an organization that "espouses a monotheistic religious philosophy, advocating the worship of a single, all-knowing, all-powerful God." The insignia of the Soldiers of the One is an infinity symbol.

Special Agent Duram also revealed that the STO has been dormant for the last ten years, and though the Global Defense still has a lot of evidence to go over, "Everything points to their involvement."