MAGLEV Memorial Ceremony to be held in Apollo Park 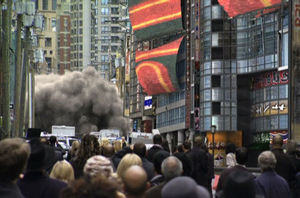 MAGLEV Memorial Ceremony to be held in Apollo Park is a The Caprican News article written by Ann Royall. It was printed in Februarius 6, YR42.

A formal ceremony will be held in Apollo Park this week to honor the victims of the MAGLEV bombing. 500 of people were killed and over 100 injured when a bomb was set off mid-day on a crowded MAGLEV train soon after it departed from the Caprica City downtown station. Though the monotheism group Soldiers of the One are believe to be behind the attack, their exact motives for blowing up a MAGLEV train remain unclear.

Capricans are still on edge as many fear it will happen again. Caprica City officials hope that the memorial ceremony will help alleviate some of this sorrow and fear. "We are all still distraught by this terrible and senseless tragedy," said Joan Leyte, Caprica's new Minister of Defense. "We will do everything we can to help Capricans begin to heal and to make them feel safe again in the city they call home."

The Mayor of Caprica City, members of the Department of Justice, and families of the deceased are scheduled to speak at the event, which will also be broadcast live on CapTV. The memorial is being sponsored by Graystone Industries. Daniel and Amanda Graystone are the parents of Zoe Graystone who was killed in the attack.